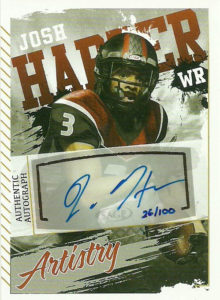 Josh Harper played for the Bulldogs of Fresno State. I don’t know what it is. Maybe it’s the water or weather up there, but the Bulldogs just produce a ton of wide receivers, regardless Josh kept the lineage alive. He first arrived on the scene at Fresno in 2011.  After two decent years, he broke out in 2013 with his first 1,000 yard season (79 receptions, 1011 yards, and 13 TDs). Despite his numbers, he was not selected in the 2015 NFL Draft. He signed as a free agent with the Oakland Raiders that year but did not make the squad. Josh signed with the Calgary Stampeders of the CFL the following year, but was cut soon thereafter.  Currently he is a free agent.

I love these Sage Artistry cards. They do the best they can for not having any college logos or uniforms and making exciting cards out of otherwise unheralded players.