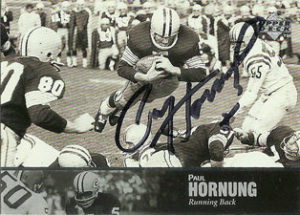 While at Notre Dame from 1954 to 1956, Paul Hornung played quarterback for the Fightin’ Irish.  Over 3 years he threw for 1696 yards on 110 of 233 passes, with 12 TDs to 23 interceptions. A gifted runner, Hornung had 209 carries for 1051 yards and 6 TDs. Now during those years, passing was still in the stone age, so those totals were actually pretty substantial. Despite playing for a losing team in ’56, Hornung rushed for 420 yards and 6 TDs, while passing for 917 yards and 3 TDs, earning him the 1956 Heisman Trophy Award.

Paul was the first overall pick of the Green Bay Packers during the 1957 Amateur Football Draft.  The Packers liked Hornung’s rushing style so they converted him to a ‘back. Now the reason I use the eponymous term ‘back’ is because Paul saw time at fullback, halfback, – something called ‘L-back’ and heck, he even did some kicking duties over the next 10 seasons. Arguably his best year came in 1960, a year in which he led the league with 13 rushing TDs, 15 total touchdowns, 41 extra points, and 15 field goals. While he did not play in Super Bowl I, Paul culminated his career by earning the first Super Bowl ring.  His number was unofficially retired in 1967 by the Packers.

All around high marks for this solid looking card. Upper Deck really hit the nail on the head in 1997 with this set. It did it all and it became an instant classic. This overall impressive photo of Hornung is only complimented by his autograph- something that I got lucky on getting in such pristine condition. Not only does Hornung’s autograph tend to get rushed and sloppy looking from what I’ve seen, he sent this one back in my unsealed SASE. Still for a mere $10 getting a Hall of Famer, a number one overall pick, AND a Heisman winner on a card is a bargain.