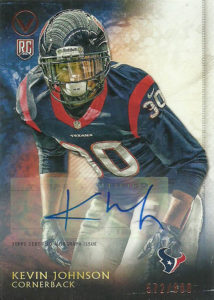 Johnson went 16th overall in the 2015 NFL Draft. The Texans were rumored to be after runningback Melvin Gordon, but with him going off the board a pick before to the San Diego Chargers, Houston decided that they needed to reload at corner- a position of constant need since the Texans play so many nickel formations.

Color me unimpressed… With the Texans deep at defensive back at the time with Andre Hal, Darryl Morris, and AJ Bouye (looking sorta sloppy that year), behind starters Johnathan Joseph and Kareem Jackson, I though that this was a ‘pants down’ sort of pick. I even was interviewed by the local media in Houston after the pick was made and told them that while I had been impressed by the first round pedigree the Texans had produced in the past, I just wasn’t excited about this pick.  In general I wasn’t really excited with anything on the board after Gordon was snapped up, and hoped the Texans would trade down in order to nab more picks.

So far it’s been a mixed bag with Johnson. His rookie year provided solid results: 10 starts, 54 combined tackles, 9 passes defended, and his first career interception (from Zach Mettenberger). All signs pointed to up, but since then its been an injury plagued run. In the off-season he had a fractured foot and a broken wrist surgically repaired. Then he saw action in only 6 games during 2016, (starting 3) making 25 tackles and 3 passes defended, before breaking his foot against the Colts in Week 6.  (This allowed AJ Bouye to really step up and hone his craft as a shutdown defensive back in a  contract year with the Texans.) During a week 2 contest in 2017, Kevin suffered a grade 2 MCL sprain against the Bengals, knocking him out an additional 4-6 weeks. Then later in week 11, Johnson suffered a concussion against the Cardinals.

I felt as though in 2017, that Johnson’s skills had regressed. Teams relentlessly picked on the former #1 when he was on the field. He finished with 44 tackles and 2 passes defended in 11 games (4 starts).  As we progress into the 2018 season, the jury is still out on Kevin’s lofty draft selection.

This is a great looking card. I really like the production of Topps Valor to give the image that extra punch. I was able to get this autograph on the cheap- like 3 bucks or less, so I figured why not and picked this one up.