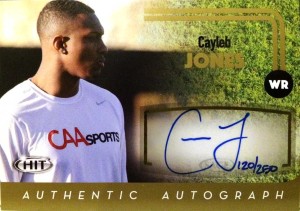 The son of former Cowboys LB Robert Jones and nephew of former Saints QB Jeff Blake, Cayleb Jones played High School ball in Austin, Tx at Austin High School. The wide receiver was recruited by the University of Texas, but in the wake of the change over from Mack Brown to Charlie Strong and being charged with misdemeanor assault in 2013, Jones elected to transfer out of UT to Arizona. Jones, at 6’3″, 215 finished his college career with 130 receptions for 1,958 yards and 14 TDs. He played in all 13 of the Wildcats’ games in 2013, including a 45-37 win over New Mexico in the New Mexico Bowl.  Cayleb Jones was considered a sleeper in the 2016 NFL Draft with all the puzzle pieces of a complete receiver- that hasn’t completely put it all together yet.

After the NFL draft he signed a free agent contract with the Philadelphia Eagles.  He made it all the way to the final cutdowns before being released. Later in the year he signed with the Minnesota Vikings but was cut during preseason, after seeing limited time on the field dur to injury. He resigned with the squad at the end of the year on a futures contract, but was later suspended the first 4 games of 2018 for violating the league’s PED policy. He was again released by the team at the end of the preseason.