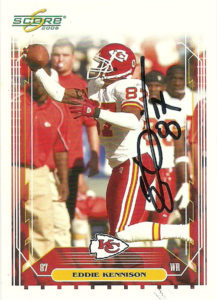 Ah Eddie Kennison. I only casually followed the 1996 Draft. Things had already been put into motion with the Oilers, and with my personal life a complete disaster zone at the time, I was completely and utterly disinterested in football. Still, in the meantime, when the Rams selected Kennison, for a brief shining moment there he was the WR compliment for Isaac Bruce, before the appearance of Torry Holt.

An LSU product,  Eddie played for the Tigers from 1993 to 1995. His best year came in ’95 when he put up 45 catches, 739 yards, and 2 TDs. A track man, Kennison averaged 15.9 yards per reception. He had some good measurables entering the combine running a reported 4.29 40.  He’d be the 3rd receiver taken off the board, after Keshawn Johnson and Terry Glenn, and a spot ahead of future HoF WR Marvin Harrison. -Truly the 1996 draft was stocked with WR talent.

In his first season with the Rams, Eddie put up a solid stat line of 54 receptions, 924 yards and 9 TDs. He’d also contribute on special teams as a punt returner with 29 returns for 423 yards and a whopping 2 TDs. After the 1998 season, Eddie was signed by the rival New Orleans Saints. He’d record a career long 90 yard TD reception against the Atlanta Falcons in 1999 and lead the team in yards and receptions despite a quarterback carousel of talent. After the season the Bears traded a mere 5th round pick to get Eddie, where he’d spend just one season with Chicago before heading off to Denver in 2001.

Eddie had a rough ride with the Broncos. After 8 games he decided that he had enough of the sport and opted to retire. Denver released him, but Eddie decided that he still wanted to play after all. About a month later, he signed with  the rival Kansas City Chiefs. Eddie had his best years in KC, spending the next 7 seasons there. He had his best 2 seasons professionally in 2004 and 2005 respectively putting up consecutive 1000 yard seasons and posting career highs in both receiving and yards. After the 2007 season, he’d briefly resurface with the Rams in 2008, and retire after signing a ceremonial one day contract with the Chiefs.

Lance came through again with this one at the Louisiana Sports Hall of Fame dinner getting Eddie on this Chiefs card. Little known fact is that Kennison refuses to sign any cards from his early playing days on the Rams. Whether this is due to them being rookie cards or that he just has some bad memories with them is unknown. This is not a bad looking card. I find the embellishment and the pencil thin lines to be a bit distracting, but the photo is pretty solid. You can always count on Score to at least have good action photography and provide a wide spectrum of players from each team.