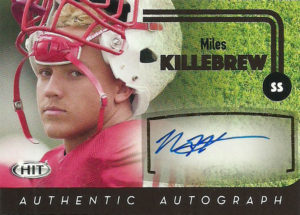 Miles Killebrew is an intriguing hybrid player out of Southern Utah. A well decorated 4 year starter for the Thunderbirds, Killebrew was a feared enforcer both at the line of scrimmage and in the secondary, and a reputable special teams player. A combine top performer, Miles led his group in the bench press, verticle jump, and the broad jump. Scouts felt his compact body passed the eye test as well. Graded as a 3rd or 4th round pick, Miles was selected by the Detroit Lions in the 4th round. He is expected to spend time both at safety and at linebacker for the team. Miles finished his rookie campaign with 28 tackles, 1 pass deflection, and an interception for 7 yards. He started 3 games in 2017, (while playing in all 16 contests) and recorded 38 tackles, 5 pass deflections, 1 forced fumble- and an interception, that he returned for 35 yards for a TD in the opener against the Cardinals.

Currently, the Lions seem perplexed as to where to shift Miles to in their defensive alignment. They like his skillset, but the franchise seems torn between keeping him at safety or moving him closer to the line of scrimmage and working him at linebacker.