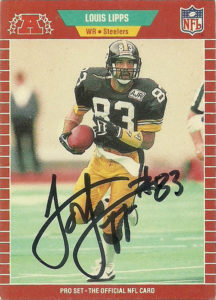 Louis Lipps is a highly reliable TTM respondent, provided you insert his very nominal fee. He’s got a great signature with two very nice loops in it, which accentuates these cards very nicely. Once ProSet and Score came out, a bevy of really nice action shots popped up of him. Among my favorites are these Proset entries and the Gameday card I got autographed. I always hesitated getting Lipps- much like many members of the Steelers, because of the rivalry that they shared during the late eighties and early nineties with the rise of the Oilers.  He always seemed to bring his best games against the shoddy secondary of the Oilers there for a while, until Cris Dishman and Darryll Lewis stepped up. 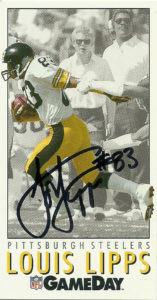 Louis Lipps slipped onto the NFL radar and into the first round of the 1984 draft. Selected by the Steelers out of powerhouse Southern Mississippi, Louis had a stellar rookie season, under the tutelage of grizzled veteran John Stallworth. Louis went on to become NFL rookie of the year, with 656 yards in punt return yardage, to go along with 856 yards on 45 passes and 9 TDs. He also earned a Pro Bowl berth and AP honors. His best season as a receiver came the following year, when he posted 59 catches for 1,134 yards and 12 TDs. A solid barn-burning option, Louis had 4 seasons over his career where he averaged 18.9 or more yards a click. While he’d never crack the 1,000 yard plateau over the rest of his career, Louis twice peaked at over 900 yards with 973 in 1988, and 944 in 1989- a year in which he was named team MVP.  He finished his career taking a flyer with the Saints for 2 games in 1992, in an otherwise unremarkable season. 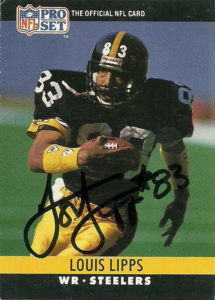 Thanks in part to playing during the highly forgettable era of the mid to late 80s (for Steeler fans), and a swath of unheralded quarterbacks, Lipps largely is ignored for his contributions and numbers in the Steelers stat books. He also was surrounded by talent from other eras such Lynn Swann, the aforementioned John Stallworth, and then in the current era by guys like Antonio Brown. Louis currently lives in the Pittsburgh area.