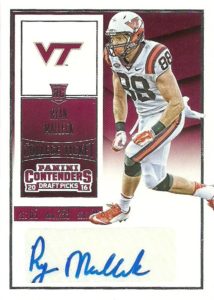 Ryan Malleck played for Virginia Tech from 2012-2015. He saw action in 33 games, recording 62 receptions for 658 yards and 4 touchdowns. Scouts felt he had the size to work the field as a tight end at the pro level but felt his blocking needed some polish. He went unselected in the 2016 NFL Draft. Since that time Malleck has stayed busy, logging time on the Giants, Steelers, Ravens, and later in 2017- the Houston Texans. He made his first professional catch while with Houston for 3 yards. Ryan resigned with the Steelers in 2018, but was waived and placed on IR for the 2018 season after an undisclosed injury.