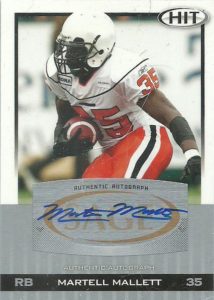 Martell Mallet has led a very interesting football career.  Admittedly there really wasn’t much to go on for scouts when it came to Martell. He played at Arkansas Pine Bluff and only saw action in 2007 and 2008. His body of experience was limited, With a bit over 170 touches and a little over 1000 yards to his resume, it is easy to see why the big back went undrafted in 2009.

Mallet still wanted to play, so he signed with the CFL joining the British Columbia Lions that year. He’d have a pretty sensational rookie year finishing with over 1400 yards rushing, setting the single game franchise rushing record (213 yards), and earning the CFL equivalent of Rookie of the Year.  After the season he’d join the Eagles in early 2010 and spent much of the early portion of the year on and off the squad. After a brief stay on the Browns practice squad during that year and a return to the Eagles in 2011, Mallett again was on the move to the New York Giants. An injury prevented him from suiting up, and he was given an injury settlement.

Martell decided to try his hand again with the CFL signing with the Hamilton Tiger-Cats in 2012. He got injured in camp and was on IR the entire year. During 2013 he’d be released and then in 2014 Martell signed with the Calgary Stampeders. At this point, Martell had gone roughly 4 years without playing in a game. He came in for the Stamps in a pinch and ran for 163 yards on 27 carries. His efforts helped the Stamps win the Grey Cup. After the season, he retired from football.