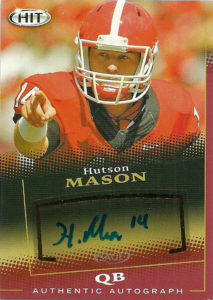 The heir apparent to Aaron Murray at QB at Georgia, Huston Mason saw some emergency action in relief of Murray, before taking over full time as starter in 2014. He passed for 2,167 yards, 21 touchdowns, and four interceptions on 188 of 277 throws that year- making him the most accurate passer in Georgia history. Mason made the best of his career in college, but scouts were unimpressed with his arm. He would not be selected in the 2015 NFL draft and eventually signed as a free agent with the Washington Redskins. Later he’d briefly pop up in the CFL with the Roughriders. To keep his football mind fresh he’s done some high school coaching and most recently participated in The Spring League during 2017.  He’s also dabbled in broadcasting as well for ESPN3.

Pretty solid card here from Sage of Hutson Mason. The colors really stand out on the canvas and while he doesn’t have the ball he certainly serves some leadership with his extended finger pointing there off canvas.