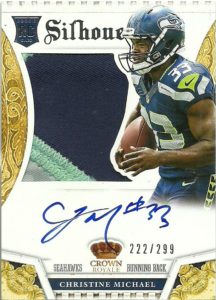 Christine Michael played college ball for Texas A&M from 2009-2012. He posted solid numbers while at the school and finished his career there with 529 carries for 2791 yards and 34 TDs. With a whopping 5.4 yards per carry, C-Mike was also an effective receiver out of the backfield posting 44 receptions for 323 yards and a TD.  His numbers during the combine were effective enough to help his draft stock. He’d be selected in the 2nd round of the 2013 NFL Draft by the Seattle Seahawks.

C-Mike played sparingly over the next few years. Fantasy Football owners regarded him as a sexy deep sleeper, especially with questions about Marshawn Lynch and Robert Turbin. He’d be traded to the Dallas Cowboys in 2015. Looking for depth after the departure of DeMarco Murray, Michael was viewed as a forward thinking trade by the Cowboys. Instead of fighting for a starting nod, Christine was on the street quickly in November. He’d be briefly on the roster of the Redskins, before returning to the Seahawks.

The Seahawks knew how to use C-Mike right. He’d post career highs in rushing twice over the next few weeks filling in for Lynch and Thomas Rawls. He’d re-up with the Seahawks in 2016.  Michael appeared to be the starter for the following season, but with the emergence of CJ Prosise and the return of Rawls, C-Mike was inexplicably cut. He quickly found a home with the runningback starved Green Bay Packers and finished 2016 with the franchise.  He’d finish with a career high 148 carries for 583 yards and 7 TDs, along with 22 receptions for 107 yards and a TD- in his Frankenstein season between Seattle and GB. Michael signed with the Colts in 2017 but did not see a snap as he was placed on IR before camp began. He made it to the regular season of 2018- but was cut after the first game. Currently he is a free agent.

I got a really nice two for one deal when I bought this little box. Inside was Jarrett Dillard and for the patch card, an autographed Christine Michael. It was quite the charge as these boxes are just supposed to have one autograph and one patch in them, but I’ll take it! This is a great patch card! It’s just the right size where it isn’t jumbo, but at the same time, it’s not too tiny where I feel like I’m just being given a taste. The patch is also a ‘tri-color’ to boot. Otherwise, the design is a bit garish. I was never really too much of a fan of Crown Royale, and the gold fleurons combined with the spiral bound look at the bottom and top of the card, just really doesn’t- sing to me.