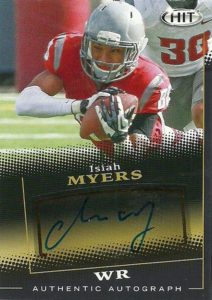 Isiah Myers played for the Washington St Cougars from 2011 to 2014. His numbers grew for the most part every year climaxing in his senior campaign, when he was on the Bilitnikoff Watch List. There Isiah put up 78 receptions for 972 yards and 12 touchdowns. Both his receptions and touchdown numbers are top 3 single game records in school history.  His best game however came against Portland State in 2014, when Isiah hauled in 11 passes for 227 yards and 3 touchdowns, including a 55 yard grab.

Myers was not selected in the 2015 NFL Draft. His size (6’0″, 188) and average pro day may have worked against him. I was surprised to see that he didn’t apply his trade to the Arena leagues, however currently Isiah is putting his Sociology degree to good use in Florida.