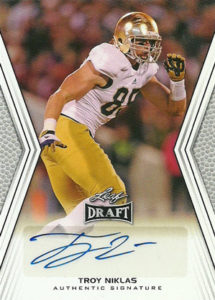 Troy Niklas was the back up to wonder TE Tyler Eifert while at Notre Dame.  He played 3 years at the school from 2011 to 2013.  Niklas played his Freshman year at linebacker, but realizing his talent and having a need at tight end, coaches decided to move Troy to the offensive side of the ball. He came on strong during his Junior year in 2013 when he recorded 32 receptions for 498 yards and 5 touchdowns. Troy was selected in the 2nd round of the 2014 NFL draft by the Arizona Cardinals.  Injuries however have derailed most of his career.  He had his first professional touchdown during week 6 of 2015 on a 13 yard reception. The Cards used him in sort of an H-Back role in 2017. In 11 starts he had 11 receptions for 132 yards and a TD. With the apparent emergence of Ricky Jones-Seals at tight end during the course of the season, Niklas was allowed to test the free agent waters in 2018 and signed with the Patriots. Currently he’s a free agent.

So this and another autographed card, I was digging through the collection and realized that I had never uploaded them (or I had uploaded them and something happened on the production side with my website and they were removed). Better late than never 4 years or so later! Guess it is time to do an inventory.