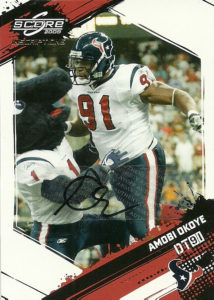 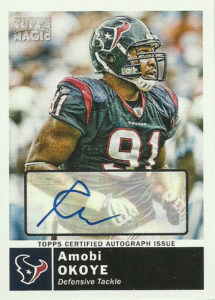 Amobi Okoye had a rough run there after his first month in the NFL.  I am really not sure what the Texans expected out of Okoye -other than he take the league by storm.  It was a tall order for a kid, considering Okoye was the youngest player in the NFL to ever be drafted in the first round. In the end, he signed a 5 year contract with the team, but only finished out 4. With so much promise, especially after that first month, it is still surprising that Okoye is considered a bust. His best season was his rookie season when he recorded 5.5. sacks.  Amobi had a brief resurgence in 2010 with a career high 44 tackles and 3 sacks, but after that season, Amobi was cut.

He’d sign with the Chicago Bears and record 27 tackles and 4 sacks in 2011. He’d be cut in 2012 by the Bucs, but later returned for the last month of the year off the bench for the Bears again. Amobi was stricken with a rare medical condition that forced him to be induced into a 3 month coma to prevent seizures in 2013.  He spent the next 17 months battling anti-NMDA receptor encephalitis, experienced a 145-day memory gap, and lost around 80  pounds.  Amazingly he returned to the practice field in late 2014, signing with the Dallas Cowboys, but was released in 2015. Later in 2016 Amobi signed with the CFL Saskatchewan Roughriders, but did not see action with the squad. In 2017 he penned a Players’ Tribune piece and expressed that at 30, he still feels that he can play and contribute to a squad. I for one hope he is given that chance.