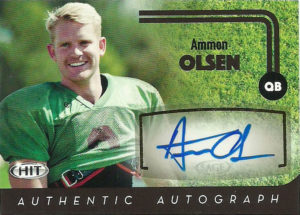 Ammon Olsen played for Southern Utah as a Freshman before heading on a Mission.  After he returned he joined BYU, but ultimately returned to Southern Utah in 2014 where he became the Thunderbird’s incumbent starter at quarterback with 3049 yards and 21 TDs completing 63.3% of his passes.  In his Senior year, he had 26 TDs and only 8 interceptions, while passing for 3,344 yards. Olsen has the NFL frame of a quarterback (6’3″, 220) and a strong arm, but went unselected in the 2016 NFL draft. He’d sign as a free agent with the Indianapolis Colts, however he was cut before the season began.