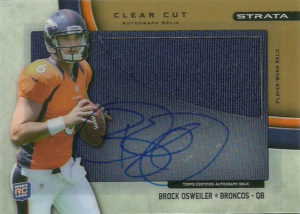 Brock Osweiler had a solid Junior year at Arizona State completing 326 of 516 passes for 4036 yards with 26 TDs to 13 interceptions. He’d declare after the season and enter the NFL Draft for 2012. The opinions were mixed on Brock. From the scouts in particular the talk was polarized.  He’d end up going in the 3rd round to the Denver Broncos to be groomed as Peyton Manning‘s heir apparent.

He’d ride the bench from 2012-2014, picking up some garbage time. It’d all change in 2015, when Manning suffered a foot injury. Osweiler came in and had a very hot hand leading the team to a 5-2 record in Peyton’s absence. Coach Kubiak was willing to let it ride, but eventually benched Brock in favor of Peyton. Manning despite having the worst year of his career, guided the Broncos the rest of the way to a Super Bowl victory.

It was obvious that this was Manning’s last hurrah, but it was also a contract year for Osweiler. Rumor swirled that Brock was unhappy about his benching and this played into his decision to play the free agent market. GM John Elway wanted to keep Osweiler in house and made a competitive offer, but in the end the Broncos just didn’t want to match what was being offered on the open market. Enter the Houston Texans.

Brock was offered a 72 million dollar contract to sign with the Texans. Houston had long suffered with a who’s who of quarterbacks, and felt that after their 30-0 shellacking at the hands of the Chiefs, that Osweiler was the man. His pedigree suggested that. During his run in Denver, Brock beat both the Chiefs and the Patriots, and studied under Peyton Manning. That had to amount to something right?  Osweiler certainly talked the talk and walked the walk when he arrived in Houston. He had a pretty decent preseason for all points and purposes aside, but already there were concerns about him. The first thing that troubled me was head coach Bill O’Brien had not met Brock before the team signed him. -I mean it’s not too entirely uncommon to happen in the NFL with the GM making the moves and all, but O’Brien is a sticky, hands on, in your face coach with his QBs. Still the pairing seemed to be a workable one. O’Brien is considered a renown QB whisperer, squeezing talent out of discarded journeyman quarterbacks.

Houston’s history of QB frustration goes back to the days of Warren Moon. Blessed with Moon’s golden arm, the city was nothing but spoiled from his excellent play. As time has passed, Warren’s skill has only become legend, and the fanbase has  wanted that back desperately since the Texans arrived in 2002. That can put a tremendous amount of pressure on a QB. While initially optimistic about the signing, I immediately got worried based on past failure with big name free agent signings- who talked the talk, but did not walk the walk. Given an option to pick between a Brock Osweiler jersey and RB Lamar Miller- I quickly selected the latter.

The Texans opener was against the woeful Bears in Houston. I expected a slaughter. While there were some bright points, I was already troubled by Brock’s pedestrian numbers. During his tenure in Houston he failed to eclipse 300 yards in any game. In 11 games of the 15 he played that season, Brock had at least an interception, and in 3 games he had 2 or more. His average yards per attempt was a woeful 4.97 and did not throw for 3 or more TDs in any game during the year. The worst part about Osweiler, was that he really showed me that there was such a thing as a bond between QB and his receivers- as he had none with DeAndre Hopkins, a guy who could catch a pass from a scrub off the street.  In essence, Brock failed to deliver. He failed to take over any game he was in.  It was no fault of the Texans organization. Throughout as much of the season as they could they portrayed an extremely professional demeanor about his play. While most fans were exiting Osweiler One after 4-5 games, I gave him well over half a season. The in person performance I saw against the Lions cinched it for me. He just couldn’t hit the side of a barn to save his life.

Benched in favor of Tom Savage to cheers during a week 14 matchup with Jacksonville, it appeared that the Brock Osweiler experiment was already over, after Savage rallied the Texans to a win, but in the following game against the Titans, Tom was diagnosed with a concussion. Brock had words with Coach O’Brien that devolved into a screaming match at halftime, and then an accusation of being ‘restrained’ from leaving.  Essentially Brock mouthed off to O’Brien that, “He needed him now,” and O’Brien wasn’t having it. Despite Os’ season of futility, the Texans won the AFC South primarily on the back of their defense’s titanic effort. The Texans upended the Raiders in the playoffs, but Osweiler’s inefficiency was in full effect against the Patriots. He’d throw 3 picks, complete under 50% of his passes, with each completion averaging a measly 4.97 yards. Of note, Osweiler set the Texans single season franchise mark for interceptions with 16.

After the season the Texans did an evaluation of their talent and decided they had a problem. After discussions with the Browns, the teams cooked up a clever way of dealing with Osweiler and his contract. The Texans traded Osweiler to the Browns with a 2018 2nd round pick, in exchange for a 2017 4th round pick. Both teams came out a winner in the deal. The Texans jettisoned a toxic product and a large contract. The Browns were essentially buying a 2nd round pick and if they could turn Brock around- a player to boot. The contract hit to the Browns bottom line didn’t matter. (They had a ton of cap space to spend.)   While there was some initial preseason hype around Os, (including a hilarious promotion video) he didn’t make the squad. Unable to find a trade partner for Brock, the Browns cut him before the beginning of the 2017 season. I don’t feel badly for Osweiler. He won a Super Bowl ring and made out like a bandit. Literally while composing the post in 2017, Osweiler was working on signing again with the Broncos- proving you can indeed go home. He only lasted one season in his return to Denver, posting 5 TDs and 5 interceptions to go along with 1,088 yards and a 55.8 completion percentage.  In March of 2018 he signed a free agent contract with the Miami Dolphins where he is expected to duke it out for a backup spot behind Ryan Tannehill.

Talk about poor timing. I sent to Osweiler the week after he got benched. He was signing at a furious clip, and then all of a sudden BANG he stopped.  I had been waiting it out to get an autograph of his- for posterity’s sake, but the market on his autograph for some reason was very expensive. I got lucky and it so happened that this really nice card popped up at a bargain value. It should be noted that while the Topps Strata Clear Vision is really a well designed patch card- the patches are not authentic and say so in very, very small type on the back.