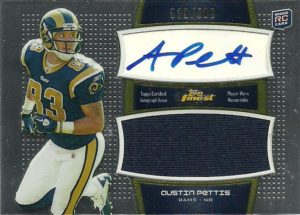 One of the finest receivers to grace Boise State, Austin Pettis essentially owned the Broncos’ career receiving charts finishing with 229 receptions (1st), for 2,838 yards (2nd), and 39 touchdown receptions (1st). Well decorated, he earned Second Team All-WAC in 2008, and First Team All-WAC in 2009 and 2010.  Austin had a decent combine, and led receivers in the shuttle drill, parlaying his performance into a 3rd round pick of the then St. Louis Rams in 2011.

He finished his rookie season suspended for PEDs, but managed to haul in 27 receptions for 256 yards. Pettis also saw spot duty on special teams as a punt and kick returner. Austin caught his first professional TD the following season in 2012 against the Packers, and finished the year with 30 receptions for 261 yards and 4 touchdowns.  He built on his numbers again in 2013, with a career high 38 receptions for 399 yards and 4 TDs.  In 5 games during 2014, Austin logged 12 receptions for 118 yards and a TD, but was cut in October.

Austin signed with the then San Diego Chargers for 2015. While he did have a solid camp, he was among the final cuts to the 53 man roster. Austin has gone into coaching since football and as of 2018 is a personal trainer/ wide receiver coach for OCPremium in California.

This is a nice patch card from Topps. It showcases 3 important elements very well: the autograph, the player portrait, and the patch. The design, while a bit busy with the dots, is unified in theory by its association and lack of color.