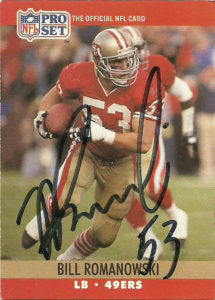 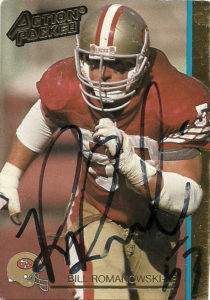 Ah now Bill Romanowski had some awesome cards. I mean he looked like a mean caveman who just had survived a knife fight. With tattered taped gloves and that war paint, he went from just being a linebacker to being a mean and nasty linebacker pretty quickly. His ProSet 1990 entry and Action Packed 1992 are among some of my favorites, and his GameDay card showcases his athletic ability as he gets up in the air, perfect for that tallboy card.

I really didn’t know who Bill Romanowski was at first when he popped onto the scene for the 49ers. Initially- you didn’t hear much about Bill. He was considered, I guess, a model citizen until he started having altercations on the Eagles- a clear 7 years into his career.  It’s not really clear about when he started abusing steroids while playing, but he admitted during a 60 Minutes interview that he was always cutting edge and staying one step ahead of the league. 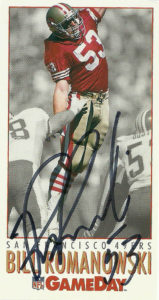 As of 2017 he owns Nutrition 53 and also is involved in NASCAR.  Bill is a very outspoken and unfiltered guy, and his sometimes, lack of political correctness, has gotten him in trouble on social media. He also appeared on the cover of Midway Games’  Blitz: The League and as a prison guard in the remake of the movie The Longest Yard. In addition he’s done some coaching, and has expressed interest in returning to the NFL in that capacity.

During his career he was an easy plug-and-play linebacker. Instinctual, intelligent, and with solid coverage skills, by the time he hit his stride, Romanowski was not only one of the better linebackers in the league, he was a throwback to the gladiators of old, with that nasty streak.  He is also listed as the 5th dirtiest player in sports history by ESPN.