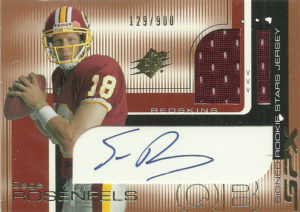 Sage Rosenfels was a quarterback for Iowa State from 1997-2000.  Although only a two year starter, he put up 306 completions (52.1%) for 4,164 yards and 18 TDs. Sage always seemed to have big numbers when the lights were the brightest, such as in the Insight.com Bowl, where he guided the Cyclones to a victory over Pittsburgh.  After a pretty solid combine, Rosenfels’ name began to climb in the view of many scouts. Still Rosenfels was considered a prospect without the big name glitter.

He’d be the 9th quarterback selected off the board- taken by the Washington Redskins with the 109th pick (4th round) of the 2001 draft. In 2002, the Redskins felt that they had their quarterback situation well in hand under Danny Wuerffel, Shane Matthews, and Patrick Ramsey, so Steve Spurrier traded Rosenfels to the Miami Dolphins for an undisclosed 2003 selection. Sage started only 2 games over the next 4 years, and was primarily only seen in mopup duty.

In 2006, the Houston Texans were in full rebuild mode under new head coach Gary Kubiak, but they wanted to give incumbent starter David Carr another year to develop at quarterback before they pulled the trigger. The team signed Rosenfels via free agency to back up Carr. Sage came in again during mop up duty and had a pretty decent effort throwing for 265 yards and 3 TDs in 4 games of relief of Carr.

During the off-season of 2007 the franchise traded for Falcons’ backup quarterback Matt Schaub. Unwilling to backup Schaub or take a paycut, Carr was cut.  With Schaub off-injured over the next two seasons, Sage got some starting time in playing 10 games and posting a 6-4 record. Sage had his best season in 2007- a year in which both Schaub and Andre Johnson were hard hit by the injury bug. It was a fun season- watching the team come together under Sage from a bunch of scrappy role players to a really dangerous offensive unit. Rosenfels was 154/240 for 1684 yards with 15 TDs to 12 interceptions.  Teams quickly became interested and envious of the Texans sudden rags to riches situation at quarterback.

Sage returned in 2008 but didn’t have as much luck posting 6 TDs to 10 interceptions on 174 attempts. While his yardage per game increased as he was relied on to carry the team a bit more over a 5 game period (1431 yards), Sage is instead known as the butt of a joke to many outsiders for an incident known as the ‘Rosencopter’.  With the game on the line against the Colts, he decided to scramble for the first down. Facing down three defenders, Sage heroically decided to go airborne, but got spun in the air like a helicopter….  and fumbled the ball… and the game away. (Despite this Sage has been relatively easy going about the incident, even going so far as to poke fun at himself on Twitter.) As a Texans fan however, I was more forgiving as you could tell that Sage just wanted to win.

In 2009 the Vikings finally consummated the trade for Rosenfels they wanted to do in 2008 for a 4th round pick. (Initially I was very worried about the deal because Matt Schaub had done nothing to prove that he could remain injury free- but my fears would be allayed.)  Sage never found the starting quarterback job long term- as fate intervened again with the Vikings soon thereafter signing Brett Favre.

Sage was traded again in 2010- this time to the New York Giants, where he’d backup Eli Manning. He’d be on the roster of the Giants through 2011. When starter Chad Henne was injured, Rosenfels rejoined the Dolphins for some mercenary action. Later in the year Sage made his final stop again with the Vikings, but was among the franchise’s final cuts in 2012.

He currently lives in Iowa, and is an active Twitter presence. When I posted this card to his profile with a ‘Blue Steel’ reference to Zoolander, he and a few other media personalities got a good laugh out of it. In 2017 he also attended Andre Johnson’s induction into the Houston Texans’ Ring of Honor.