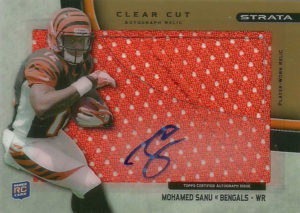 Rutgers is not exactly known as a football factory in college circles, so when a guy like Mohamed Sanu gets selected, you have to cheer for the underdog. Other people didn’t feel that way, as somebody called up Mohamed on draft day and pranked him into thinking that he’d been taken in the first round by the Bengals. Things worked out though as Cincinnati selected Mohamed in the 3rd round of the draft instead.

Mohamed had an amazing run as a Junior playing for the Scarlet Knights, posting 115 receptions for 1206 yards and 7 TDs.  In his 3 years at Rutgers, Sanu had 210 receptions for 2263 yards and 12 TDs. He also saw a decent amount of time rushing the ball, recording 125 attempts for 653 yards and 9 TDs.

He’s a sneaky pick up late in drafts that pretty much everybody is aware of now. In 2017, Sanu caught 67 passes for 703 yards and 5 TDs, and in 2018 is on pace to near or eclipse those number by the close of the season.