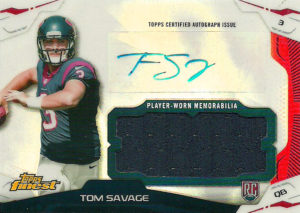 Tom Savage is a fierce competitor and a good study.  He started one season at Rutgers (2009) and put up solid numbers as a Freshman with 149 of 285 passing for 2211 yards and 14 TDs in 12 contests. He then lost the starting job after he busted up his hand in 2010 so Tom opted to transfer to Arizona and sat out a year. In the meantime the school fired its coach, so Tom transferred again- this time to Pitt where he was able to get one final year of eligibility in 2013. Savage posted 238 of 389 passing for 2958 yards and 21 touchdowns to only 9 interceptions. Scouts were intrigued. They felt that Savage was a nice sleeper for the right team. He has the right tools, build, a cannon for an arm, good football acumen, and is willing to just do whatever it takes.

Tom was projected to go in the 5th or 6th round of the 2014 Draft, and with a run on quarterbacks the Texans decided to pull the trigger selecting Savage in the 4th round. Pundits felt that Tom was the right fit, and Bill O’Brien the quarterback whisperer got his project to work on. He threw 19 passes his rookie year for 127 yards and an interception. 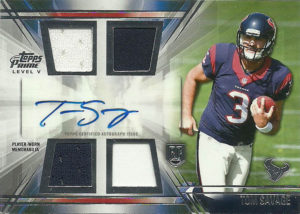 The Texans in the meantime continued to look at their quarterback options. 2015 went by and Tom didn’t throw a pass. It’d be in 2016 things got- well a bit crazy. The Texans decided to make a splash in free agency. Feeling that they were just a legitimate quarterback away from making that happen, Houston signed Denver backup signal caller Brock Osweiler to man the fort. Friction quickly grew between Bill O’Brien and Brock to the point the coach benched the erratic quarterback midway through a game against the Jaguars. Tom came in and lit a fire under the Texans guiding them to a win. For a second there fans thought that Savage was the answer at quarterback, but Tom would be concussed during a game against the Titans the following week ending his season.

During the offseason of 2017, Houston got rid of Osweiler while the Texans attempted to wait out the Cowboys for Tono Romo. Unable to make it happen the Texans named Savage the starter and then traded up and selected Clemson QB Deshaun Watson. Savage lasted all of 3 quarters into his first game against the new and improved Jaguars. It was really rough for Tom, but he was ever the team player. He’d return to the starting lineup again, after Watson tore his ACL, but suffer a vicious concussion against the 49ers ending his season. Highlights of his season included leading the Texans to a 31-21 win over the Cardinals on 22 of 32 passing for 230 yards and 2 TDs in Week 11, and in Week 13, when Tom threw for a career high 365 yards in a loss to the Titans. His final season numbers were 1412 yards on 125 of 223 passing and 5 TDs to 6 interceptions.

Moving into 2018 it really wasn’t known how the Texans would proceed further with the Tom Savage experience. It’s a shame really. I really like Tom and I still believe he can still ball in the league given the right situation. During the free agency period he signed with the New Orleans Saints where he lost a battle with Teddy Bridgewater to be Drew Brees backup.  He spent about a month on the roster of the 49ers, and as of the end of  2018 is a member of the Cincinnati Bengals.