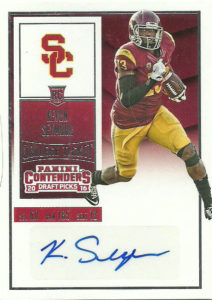 Although injuries slowed down his Senior campaign, Kevon Seymour distinguished himself enough to be recognized by scouts as a reputable defensive back. Outside of his special teams contributions, Seymour had 126 tackles, three interceptions,19 deflections, and one fumble recovery in 24 games. After he was selected in the 6th round of the 2016 draft, he made the roster of the Buffalo Bills, thanks in part to a strong preseason performance. With 3 starts and 15 games under his belt, Seymour had 14 tackles, 8 special teams tackles, and 3 pass deflections his rookie year. Losing out for the nickle back position in camp in 2017, Kevon was among a flurry of last minute trades executed by teams making final cutdowns. He’d be traded straight up by the Bills to the Panthers for Kaelin Clay and a 2019 7th round pick.