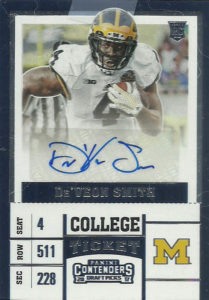 De’Veon Smith played 4 years for Michigan from 2013 to 2016. His numbers improved each year rushing for the Wolverines. His best year came as a Senior in 2016 when he carried the ball 181 times for 846 yards and 10 TDs. Over his career at Ann Arbor, he posted a line of 495 carries for 2235 yards and 22 TDs. Smith was not selected in the 2017 NFL Draft. He signed a free agent contract with the Miami Dolphins and made the practice squad after a good preseason.  It looked like there he’d stay for the foreseeable future until the Dolphins traded starting runningback Jay Ajayi to the Philadelphia Eagles. Later in the week the team elevated De’Veon off of the practice squad to the regular season roster.

I hate it when I do a redemption and it takes 5 months to get it. I was really at the point with Panini where I requested a replacement autograph, but their ‘new and improved’ redemption/ customer service system leaves much to be desired. Randomly I got a message that the card was on the way and two days later I got the autograph. Well it is a very nice looking card and De’Veon’s autograph is quality looking for sure. The timing was nearly perfect in the sense that it matched with Smith being elevated off of the practice squad. He caught 3 passes for 27 yards during the regular season, but was not tendered after the season by the Dolphins. Currently he is a free agent.