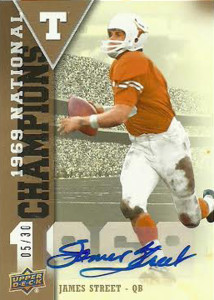 Arriving from Longview, Texas, James Street worked his way up from 7th string quarterback -to starter (two games into his Junior season), leading the Longhorns to a 20-0 record. He passed away in 2013 and is survived by his wife and 4 kids.

When we split up the boxes during the box break, I had not come across any gold cards or big hits- then I got this hit, which made up for it all. Overall this card looks pretty good. I like how Upper Deck got this nice action shot of James and the transparency on the 1969 near the bottom. I’ve seen some other UT cards that don’t work, but admittedly the gold on this one is pretty classy. James also has a very nice autograph that matches the classiness of the card.