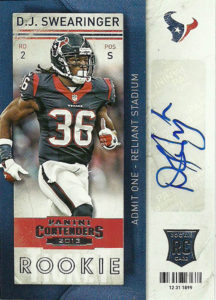 To say that DJ Swagg’s career went off the rails with the Texans would be an understatement.  After the tumultuous 2013 season, the Texans coaching staff was cleared out. In the meantime DJ started 12 games and contributed 2 interceptions, 6 pass deflections,  3 forced fumbles, a sack, and 52 tackles in 2014.

He’d be a surprising cut in 2015, and the Texans attempted to stay mum on the situation, but as these things go, somebody leaked to the media that Swagg refused to play special teams because of his lofty draft status (2nd round). Swagg was claimed by the Bucs for the season. He’d contribute in 7 games, forcing a fumble, and recording 8 tackles, before joining the Cardinals for 4 games.  Arizona liked what they saw, and employed DJ in almost every safety capacity they could use him in during 2016.  In 12 starts, he’d post 56 tackles, 2 sacks, 8 pass deflections, and 3 interceptions.  DJ signed a 3 year contract with the Washington Redskins in 2017 where he is expected to be their starting strong safety. He started all 16 games and posted his best year as a pro, lodging 79 tackles, .5 sacks, 10 pass deflections, and 4 interceptions for 32 yards. So far in 2018 he has put together a banner year for the Redskins improved defensive alignment balling out against the Giants recording 2 picks.

The 2013 Panini Contenders set had pretty solid, if not ordinary, design to it.  It’s purely designed in strong rectangles that break down the canvas into workable columns. The vertical autograph field is also somewhat unique. DJ’s autograph however, looks tired and sloppy on this card. The 2013 NFL draft was a terrible, terrible draft for the Texans of their 9 picks, only 3 players remain from that pool on the team.