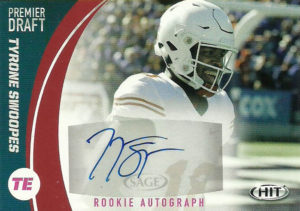 A rock solid athlete, Tyrone Swoopes played for the Texas Longhorns. During his time at UT, he played quarterback and wide receiver. At the scouting combine, scouts liked his frame and skill set so much they thought that Swoopes was better suited to be a tight end. That begs the question. Were things that bad at the University of Texas at quarterback during the Charlie Strong era at one point, that their best quarterback was a tight end? Tyrone played mostly mop up duty in 2013. His best season at quarterback came in 2014 when he compiled 224/384 with 2409 yards passing and 13 TDs.

In 2015, Strong opted to take the offense in a two-headed quarterback approach with Jerrod Heard primarily manning the starting position, while Swoopes came in as part of the 18 Wheeler package. The 18 Wheeler was a mismatch package the Longhorns used placing typically 7-8 men on the line, while the QB sat in shotgun with a RB while a FB moved in motion. More often than not, it was a run play.  Primarily from this formation, Swoopes finished with 74 carries for 451 yards and 12 TDs rushing. He also threw for 537 yards and 4 TDs.  With the arrival of QB Shane Buechele on the 40 acres and him stretching the yardsticks, the Longhorns didn’t really need to use the 18 Wheeler package as much. Swoopes was backup QB for the season, and rushed 54 times for 174 yards and 7 TDs.

Swoopes is fondly remembered at UT home games for inspiring the school to play “Whoomp There it is” after every TD that Tyrone scored. Longhorn Legend Rod Babers is credited with making the association and changing the song to “Swoopes There it is”. The rest is history.

Tyrone was not selected in the 2017 NFL draft. He elected to sign with the Seattle Seahawks as a tight end. It should be an interesting transition for the former quarterback as he did not catch a single pass in college. He made the practice squad for the Seahawks and was activated for their final game in 2017, but did not see any significant playing time.