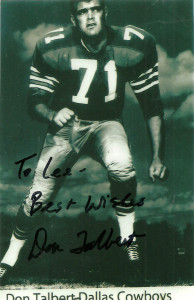 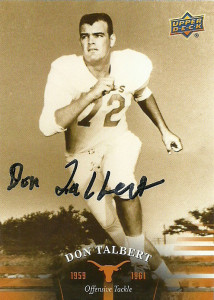 The Talberts (Charlie, Don, and Diron) were a family line that infused the University of Texas during the 50s and 60s with raw talent. Don Talbert, the eldest of the clan, 6’5″, 210, was a two way star playing both offensive line and defensive line for the Longhorns from 1959 to 1961. He was a co-team captain and earned All SWC and All-American Honors after the 1961 season.

Don was selected by the Dallas Cowboys in 1961, where he played both sides of the line.  (He was also selected in the 34th round of the AFL draft by the Houston Oilers, but declined their offer.) After serving 2 years in Vietnam, he returned to the Cowboys in 1965. Don was selected by the expansion Atlanta Falcons in 1966 where he grew into starter material until he was traded to the Saints in 1969.  After two seasons blocking up front for New Orleans, Don was traded again- this time back to Dallas.  Talbert played for the Cowboys through 1973 and won a Super Bowl ring (VI).

Don joined the upstart WFL in 1974 as a member of the original Houston Texans. (The franchise did not last the year and moved to Shreveport where it was renamed the Steamer.) He’d retire after the season concluded.

Don signed this UT card of his in a very short time. He also mailed me this signed photo memorabilia as well. For a while there after football Don was owner and president of Talbert Investments- specializing in real estate out of Houston.