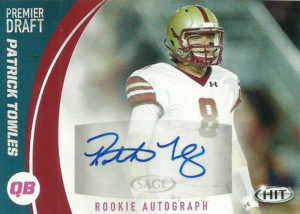 Patrick Towles played at Boston College where in his final season of eligibility for the Golden Eagles, he threw for 1730 yards, 12 TDs and 7 interceptions.  He had previously played for the Kentucky Wildcats, but lost his job and opted to transfer.  Over his time at Kentucky, Towles threw for 5,099 yards, 29 touchdowns, 19 interceptions on 759 attempts.  After not being selected in the 2017 NFL draft, the Texans decided to take a stab at Patrick.

Impressed by what the 6-5, 245 pound QB offered with his strong arm, Houston invited Towles to rookie mini-camp. He served pretty much as a camp arm and did not make the cut. Patrick also saw a brief stop with the Bengals who tried him out at tight end.

I think he’d make a good fit for the New XFL or AAF- (he was one of the top undrafted free agent quarterbacks from the 2017 draft,) however as of the time of this post, Patrick is a missionary with the Fellowship of Catholic Students.