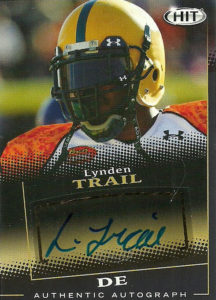 Lynden Trail was one of the darlings of the Houston Texans venture onto Hard Knocks.  Going to college at Norfolk State, he finished his Senior season with 91 tackles, 11.5 tackles for loss, and 5 sacks. Undrafted in 2015, Trail signed a free agent contract with the Texans, but he tore his quad during the preseason and received an injury settlement from the Texans.  He’d recover and sign with the Washington Redskins spending time on and off their practice squad throughout 2016.  A project player with great physical attributes (6’7″, 269), Lynden has seen the field briefly during the NFL regular season recording 2 tackles and a pass deflection.  After a brief stint with the La Rams that year, he’d rejoin the Redskins.  I saw him play in the Spring League during 2018, and soon thereafter he signed with the Hamilton Tiger-Cats of the CFL.

I had high hopes for Trail as a project for the Texans but obviously they didn’t have the patience that I did. He’s a real down to Earth story of humility and the everyday man you cheer for.