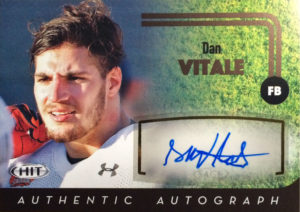 Danny Vitale played college football at Northwestern. There he played slotback and tight end. The hard nosed blocker had 135 receptions for 1427 yards and 11 touchdowns. At 6’2″, 235, Vitale would have had to seriously bulk up to play tight end, so he was classified as a fullback for the 2016 NFL draft.