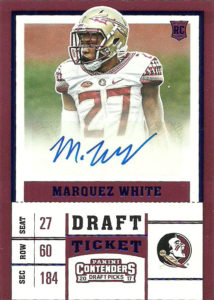 Marquez White played defensive back at Florida State, initially as a two sport athlete, but quickly decided that basketball was not going to be his breadwinner. After honing his skills on special teams, White finally saw starting duty at cornerback in 2015 with 25 tackles, 2 pass breakups, and 1 pick. He improved enough in 2016 to be named dallto honorable mention All-ACC, with 2 interceptions and 4 pass breakups. The Cowboys selected him in the 6th round of the 2017 NFL Draft. While he did not make the team, Marquez was signed the next day to practice squad. He didn’t see any playing time that year. He did not make the squad in 2018 and is currently a free agent.