Thomas Sanders was one of those rare Central Texas/ hill country kids who made it big to the NFL during the 80s. Although he toiled behind mamoths such as Walter Peyton and Neal Anderson during his time with the Bears, surviving numerous challenges to his spot on the roster, he managed to put in 5 seasons with Chicago, and then tacked on 2 more with the Eagles for good measure, at the end of his career.

Thomas played for the Texas Aggies from 1980- 1984. He had his best season in his Senior year of ’84, posting 167 carries for 738 yards and a TD, to go along with 16 caches for 89 yards. Sanders parlayed his performance into a 9th round pick of the Chicago Bears in 1985. The Bears, who were never short on RB help, decided to use Thomas as a kick returner, while he occasionally moonlighted at RB. He’d win the Super Bowl in his rookie season and be a part of the Super Bowl Shuffle squad. He started his only game of his career with the Bears in 1986, and finish the season with 27 carries for 224 yards and 5 TDs. Although he’d not see such gaudy yards per carry for the remainder of his career (8.3), Thomas had a career high 95 carries for 332 yards and 9 receptions in 1988. In 1989, Thomas scored his only TD on a kick return from 96 yards out.

Sanders joined the Eagles in 1990 after a short stint with the Chargers. He’d be an injury replacement for Robert Drummond. Thomas continued to churn up dependable yards for the Eagles, actually starting 3 games in 1991. Thomas retired after the season and now lives in Texas.

Sanders got really lucky and had some nice cards produced despite his limited playtime. The ProSet is a spectacular card, but when I pulled the Action Packed 1989 card of him, I knew I had to write him.

Jamie Morris is one of the smallest players to play runningback in the NFL. At a mere 5’7″, 188 he towered over opponents toting the rock for the Michigan Wolverines. He had 3 straight 1,000 yard seasons for Ann Arbor, culminating in his Senior campaign in 1987 when he had 282 carries for 1703 yards and 14 TDs. He finished his college career as the school’s all-time leading rusher with 806 carries for 4392 yards, 25 TDs and 99 receptions (also a school record) for 756 yards and 3 TDs. Jamie was selected in the 4th round of the 1988 NFL Draft by the Washington Redskins.

Jamie made it onto the regular season roster of the Redskins, where he was designated primarily as a kick returner. Still over the course of the 16 game schedule, Morris managed to put together 126 carries for 437 yards and 2 TDs. He also returned 21 kicks for 413 yards. Jamie is perhaps best remembered by Redskins faithful as the back who set the NFL record with 45 carries (152 yards) in a 20-17 loss to the Cincinnati Bengals in 1988.  It should be noted that over his short but notable NFL career, Jamie posted a 38 carry game and a 26 carry game in 1989 as well.

Morris signed with the New England Patriots in 1990 where he served primarily as a kick returner. He finished with 11 returns for 202 yards and 2 carries for 4 yards. Afterwards Jamie joined the Hamilton Tiger-Cats of the CFL in 1991. He had a career high 591 yards rushing, 263 yards receiving, and 435 kick return yards.

Jamie lives in Michigan and is involved deeply with his Alma Mater. I tried writing him a few years ago care of Michigan when he was working for the Athletic Department as a development manager but had no luck. Recently some successes popped up of him through the radio station where he hosts a show talking all things Wolverines- so I decided to give him another shot on these two awesome cards. Although I was happy to finally knock this retry reply off my list, I was pained to see he knew enough about Action Packed that he should sign the card in the autograph slot on the back of the card. It is truly a beautiful card however.

Action Packed did sort of a test run in 1989 with the big two titans (ProSet and Score), but got lost in the mix. The only difference between the lesser known 89 and 90 releases is that the marquee was colored on the front of the card. The 1990 set even reused some of the photos from the previous year. 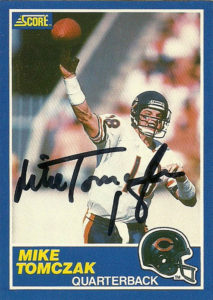 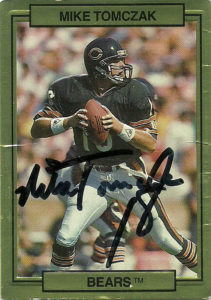 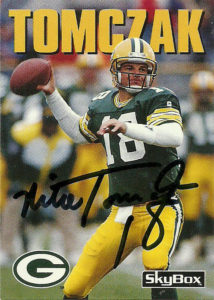