A four-year starter at right guard for USC from 1987 to 1990, Mark Tucker was selected in the 7th round of the 91 NFL Draft by the Atlanta Falcons spending most of the year on the practice squad. The next year he joined the Colts in a similar capacity and then was allocated to the Frankfurt Galaxy of the World League where he spent a season with the squad in 1992.

After the World League reorganized, Mark joined the Arizona Cardinals, playing for them the next two seasons (1993-1994). In the meantime, Mark moonlighted on ‘American Gladiators’ as an injury replacement gladiator named ‘Rebel’. His interesting career journey continued from there spending a season with the Jacksonville Jaguars as an expansion selection in 95. With the following season under his belt with the New Orleans Saints in 96, Tucker decided to take his talents to the Arena Football League, playing for the Arizona Rattlers. He experienced his best football years with the franchise, and played from 1997 to 2006 with the squad.

Mark quickly jumped into coaching offensive and defensive lines for the Rattlers, and then later the New Orleans Voodoo. He moved to the high school ranks, where he has become an acclaimed position coach over the last 20 years. 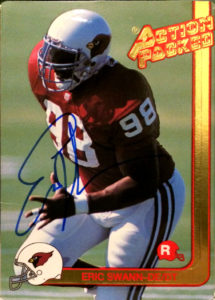 Eric Swann does not sign through the mail. When I saw this affordable signing, it was a no brainer to go ahead and send out two of my favorite cards.

Swann took a unique route to the pro level. Academically ineligible he was unable to begin college at NC State. Instead he enrolled in JC at Wake Technical, but left soon thereafter to join the semi professional football Bay State Titans in 1990.  During his single season with the Titans, Swann rocked the league with 72 total tackles, 11 sacks, 4 blocked field goals, and 4 forced fumbles playing at both defensive end and tackle.

The Arizona Cardinals fell in love with Swann’s unusual combination of size (6’3″, 311), strength (bench press of 400+ lbs), and speed (4.98 40). They’d select Eric with the 6th pick of the first round during the 1991 draft. He’d be the first non-college player chosen in the first round since Emil Sitko was selected by the Rams in 1946. 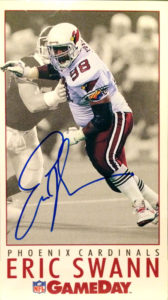 Swann’s rookie season was slowed by injuries. Shortly after taking the field in minicamp, he blew out his knee and had to have arthroscopic surgery.  He’d see action in 12 games though, starting 3, and record 4 sacks to go along with 22 tackles.  Swann over the next few years solidified his role on the Cardinal defense, recording a career high 70 tackles in 1992, and 7 sacks in 1994.  Eric also recorded a safety in 3 straight seasons from 1992 to 1994.

1995 marked the first time in some 30 years that a defensive lineman from the Cardinals was named to the Pro Bowl, as Eric recorded the first of his two nominations, with 45 tackles, a career high 8.5 sacks and 1 forced fumble. A 1996 followup yielded another 3 fumble recoveries, 5 sacks, and 60 tackles.  Although Swann had an equally dominant 1997 campaign with 7.5 sacks and 52 tackles, he did not see any further Pro Bowls. Eric played for the Cardinals through the 1999 season, joining the Panthers for a final season in 2000.  At the time of his departure from the deserts of Arizona, Swann was the most decorated and feared lineman to play for the Cardinals.

Swann briefly popped up on the football radar again in 2007 playing for the Hudson Valley Saints, and later the Arizona Rattlers of the Arena Football League in 2008.  He was also inducted into the Semi-Professional Football Hall of Fame in 1998. 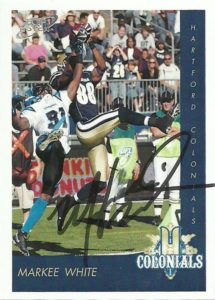