A third round pick by the Indianapolis Colts out of Florida Atlantic in 2015, D’Joun Smith had 113 total tackles, 5 tackles for loss, 21 passs deflections, 3 forced fumbles, and 9 picks for 135 yards and 2 TDs in 3 years for the Owls.

D’Joun has had problems staying on the field due to injury. He dressed for 4 games and made a tackle in 2015. In 2016, Smith was released by the Colts, and then spent a few months on the practice squad of the Lions and Titans. He’d be released in 2017.

Smith joined the AAF Orlando Apollos during 2018, and made the final roster of the team for 2019, but was inexplicably cut after the second game. (He’d record 1 tackle in the preseason contest against SD.) D’Joun joined the Baltimore Brigade of the Arena Football league, but it is unclear if he made the team or was placed on injured reserve. 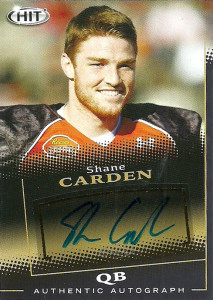 Shane Carden played for ECU and finished his 4 years at the school with 11,991 passing yards, 86 touchdowns and 30 interceptions. An opportunistic scrambler, Carden rushed for 10 TDs in his Junior year, and added MVP honors in 2013  with Conference USA, and 2014 with the American Athletic Conference.  Adding to his resume, Carden broke multiple records for passing yards and TDs. Scouts did not like Shane’s mechanics, but loved his intangibles, ability to quickly read the field, and football IQ. He’d go unselected in the 2015 draft, but sign a free agent contract with the Chicago Bears but not make the squad.

Later he went overseas and played for the Stuttgart Scorpions of the German Football League. Shane then spent half the year in 2016 with the CFL with the Montreal Alouettes. In February of 2017, Shane found a home with the expansion Baltimore Brigade of the Arena Football League. He earned AFL Rookie of the Year Honors after passing for 3,189 yards, 63 TDs, 16 INT, and 275 completions on 431 attempts.