Bobby Wuensch played offensive tackle for the blue chip studded Texas Longhorns from 1968 to 1970. He’d earn All-SWC and All-American Honors in 1969 and 1970. With Bobby in the lineup the Longhorns went 30-2-1 over that span, and he’d also be named a Co-Captain of the 1970 National Championship team. A Southwest Conference and Cotton Bowl All-Decade Team member (1970s), Bobby was selected by the Baltimore Colts in the 12th round of the 1971 draft, but did not play in the NFL. He was inducted into the Longhorn Ring of Honor in 1990, and consistently ranks among the Top 50 greatest Longhorns.

Bobby wrote me a nice note with my autograph request and as of 2019 lives in Houston. 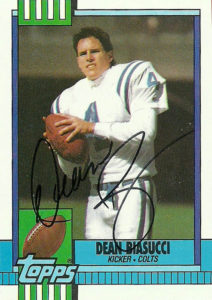