Andre sure got in a lot of great cards in his short amount of time on the starting stage in the NFL. Even after this third stab at a few more autographs, there are a few more cards I could probably nab him on.

I loved Action Packed and GameDay’s sets. Action Packed 1991 was a pretty well designed set, with that simple swoosh that goes through the left side of the image- it maximized the canvas area to focus on the player image. I also really liked the flat helmet image at the end. It’s a really underrated set, and despite the slight smudging is great to get autographed. Most of the images are indeed- action packed. This Gameday image is really nice, however one of the set’s design flaws comes forward a bit when the silver blends against the gray, the image looks a bit more flat. The Fleer 90 card was one of 4 (technically) that had a college photo of Andre in it. (The others being Topps, ProSet, and Score.) We always laughed at the fact that Fleer didn’t find a shot of Andre actually throwing the ball- but instead chose to get a shot of him pitching the ball out. All of these cards were distant set needs for me in my never ending autograph quest.

About the time that Coronavirus broke loose and some stay at home notices were put into place, Andre started signing his TTM mail after a 5-6 year absence from the game. He was initially playing catchup and then started signing some newer requests. I always liked Andre, and I hadn’t TTMed him since 2012, I decided he was ripe for the picking.

As of 2020, Ware remains the steady voice as the color commentator for the Houston Texans game day radio show. 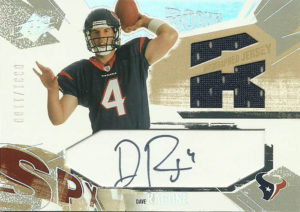