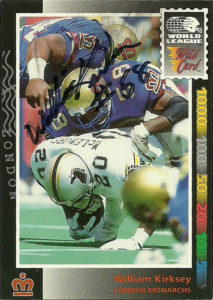 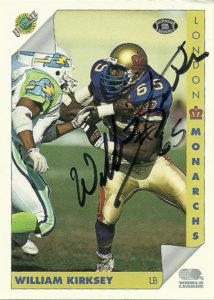 William Kirksey played collegiality for Southern Mississippi where he first gained recognition during the 1988 Independence Bowl.  He led the team with 12 total tackles as the Golden Eagles sliced the UTEP Miners 38-18.  The following year he was a team captain of the defense and led them with 146 total tackles.  During that season he set the school single game mark for total tackles (21) and assisted tackles (19) against Louisiana-Lafayette.  At the conclusion of the year Kirksey was named Second Team All-South Independent.

He went unnoticed in the 1990 NFL draft, but was signed as a free agent by the Minnesota Vikings, dressing for 9 contests.  Near the end of the year, he was signed to the Falcons practice squad.

William was selected in the 3rd round of the WLAF draft in 1992 by the London Monarchs. Despite the team’s woes in the standings, William had a solid campaign, recording a sack, and returning an interception 27 yards to paydirt. After the season, William signed with the Kansas City Chiefs, but was placed on IR before the season even began. In 1995, he played briefly in the CFLUSA initiative with the Birmingham Barracudas notching 2 tackles.  After playing for the Montreal Alouettes in 1996, William retired from playing and went into coaching.

He’s coached at the High School and JC level for many years, as a defensive coordinator,  positional coach, and recruiting coordinator. I had been looking for Kirksey for sometime and had some near misses. Finally I decided to pay to play with Spokeo, and with the data I had already on his football cards, I was able to track down a working address. So Ickey Woods was one of these indelible characters from the late 1980’s with a great personality, a good smile, and a wonderful post touchdown dance. Well you needed one back then if you were going to make a name for yourself during that era of the NFL right? Well the ‘Ickey Shuffle’ set the world on fire, and Woods became probably one of the league’s most popular players almost instantaneously with his almost bumbling bear dance.

Ickey played at UNLV, and was selected in the second round of the 1988 draft by the Cincinnati Bengals. His rookie season was nothing short of spectacular. He ran for 1066 yards on 203 carries, scored a whopping 15 touchdowns, and led the league with 5.3 yards per carry from the fullback position. Woods lost out to John Stephens of New England for Rookie of the Year Honors, probably because of the fact that the Bengals had a much better supporting cast  of Esiason, McGee, Holman, and Brown. It appeared that he was off to his same routine going into 1989, but during the second game of the season, Ickey critically blew out his left knee tearing his ACL. For a bit there, it was thought that Ickey might never do the shuffle again. In those days, the surgery and the rehab time took a lot longer and was much riskier. Back then an ACL injury usually meant a certain ending to a player’s career. Ickey made a tremendous comeback however. He missed 14 games of the 1989 season but rebounded to return for 1990 and scored in his first game back against the Browns. The Bengals were content with using Ickey as a short yardage bam-back and he played 10 games that season, but the knee just kept flaming up. He returned for 1991 but by now the backfield was getting crowded with James Brooks and Harold Green back there. Still Woods managed to start 2 games. He’d retire in 1992 with new head coach David Shula taking the reins from Sam Wyche. Ickey’s Frankenstein zipper knees just kept him out of the lineup too much to allow him to keep playing and teams were staying away. He attempted to make a comeback with Jack Pardee and the Birmingham Barracudas of the CFL USA in 1995, but was unable to re-energize his career and finally retired.

Woods hit rock bottom for a while there, but found a home selling Pre-Paid Legal. Then he became a coach and owner of the Cincinnati Sizzle, a women’s professional football team. His son Javonte also tragically passed away a few years ago after a sudden asthma attack. In his honor Ickey set up a charity  for him that the proceeds of his autograph signings go to. Woods in the meantime remains an extremely popular alumni of the Cincinnati Bengals organization.