Quan Cosby was a bonus at the Boot City event in Bastrop.  I always pack a couple of extra cards for whomever stops in and Quan had to come out to support Colt, Fozzy, and Jordan. The weekend before the XFL had announced that it was returning for 2020. I was pretty juiced about it and Quan and I talked about it for a few minutes. We agreed that it was important that the league actually put a team in Texas this time if they wanted to succeed, and they also needed to not be identified as a footnote in the ‘NFL’ section. Part of the problem is the NFL is so successful, no matter what happens in any other football league, the media just squeezes it in at the bottom of the NFL sports page. This is in part due to the fact that NFL has become synonymous with football.

A former baseball player in the minor leagues and a lover of the sport, Quan has added baseball to his announcing duties, along with sideline reporting at football games for the University of Texas.

Starting to run out of cards for Quan, but I guess that’s a good thing as he signs most things for fans. I liked the Upper Deck Icons card a lot. Its got a nice balance to it and the color is great. The Playoff Prestige? Meh. It’s okay, but the card seems a bit over designed. 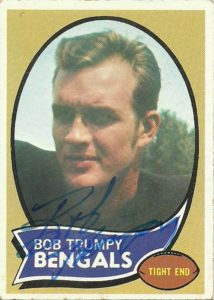 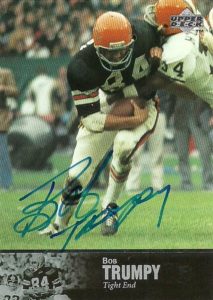 A Cincinnati legend, Bob Trumpy is a great example of the early AFL/ NFL reaching for a player whose primary sport was basketball. A surprise 12th round pick of the expansion Cincinnati Bengals in 1968, Trumpy didn’t have that much in the way of stats.  He played for Illinois in 1964 as a wide receiver. – There he had 28 receptions for 428 yards and 2 TDs, and then later In 1966 he played one additional year at Utah catching 9 passes for 159 yards and 2 TDs.

Trumpy had 2 things really going for him from the get go. First, he was an imposing specimen at 6’6″, 230, and secondly, the Bengals expansion franchise was pretty well stocked with veterans, so everyday Bob had to go out there and impress people.  Bob played 10 seasons for the Bengals putting together solid numbers during the ‘dead ball’ era of football. He’d earn 4 Pro Bowl nominations (1968, 1969, 1970, and 1973), and one All Pro nod in 1969- his best season as a pro when he had 37 receptions for 835 yards and 9 touchdowns, including an 80 yard strike. He’d retire after the 1977 season, but find his calling quickly in broadcasting.

Cincinnati loved Trumpy- so much so that he became a mainstay radio personality. Later Bob moved onto the national stage as a network color man. That’s where I became familiar with ol’ Trumpy. He did great color work during the ’80s for the then AFC Central on NBC Sports. Frequently Bob would call a play before it’d happen, or mention that some player hasn’t caught a pass in 6 games and is over due, and then all of a sudden the quarterback would throw a completion towards that overlooked player. He really was a marvel to listen to, and was especially in his element when paired up with Don Criqui or Dick Enberg.

A few months ago, I happened to catch an old rebroadcast of the infamous 1988 Wild Card Playoff slugout between the Cleveland Browns and Houston Oilers. The aforementioned team was assigned announcing and color duties and the game would end up going down in infamy. As the antics of Jerry Glanville went into overdrive, this game proved to be the final game of the Schottenheimer Era in Cleveland. It was an amazing game full of heroes, villains, and a pulse pounding finale. To this day, I still remember the game and consider it an epitome of a sports classic from the old rough and tumble of the AFC Central.

Bob continued in broadcasting for many years and in 2014 was awarded the Pete Rozelle Radio- Television award for outstanding longtime contributions to TV in radio in the realm of professional football, by the Pro Football Hall of Fame.