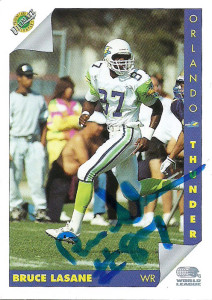 Cecil Fletcher was one of three members of the Marshall Herd that played in the WLAF from 1991 to 1992. A fearsome pass rusher and staunch run stopper, Fletcher still holds the school single-season mark for sacks with 17 along with 19 TFL that he posted in 1986. A team captain at linebacker for the 1987 team that went 10-5 under George Chaump and finished as NCAA I-AA runner ups, Cecil was one of the leaders of the “Killer Bs” defense. His 1987 was equally impressive, as Fletcher finished with 99 tackles, 11 TFL, 6 sacks, and 2 FR. After the season he was named to to the East-West Shrine Game,- the first member of the Herd since 1941. Cecil’s career totals at Marshall included 247 tackles and his 23 career sacks still rank in the top 5 in school history.

After going undrafted, Cecil signed with the Pittsburg Power of the AFL in 1988. His best season with them came in 1990 when he recorded 6 tackles, 3 sacks, 4 pass blocks, and 2 forced fumbles. A 7th round pick of the New York-New Jersey Knights of the WLAF in 1991, Cecil enjoyed a fine season for the team, recording 41 tackles and .5 sacks. He returned for the 1992 season and posted another sack before the league reorganized. Cecil returned to the AFL where he joined the Cincinnati Rockers in 1993. He’d post his best season of his AFL career with 15 tackles, 2 sacks, 3 PB, 2 blocks, and a FR- retiring after the season.

Cecil since retirement has had a wonderful life with his wife of 20+ years and 2 wonderful children. He coached High School football winning a State Championship, and as of 2013 is an estimator with Roadside Traffic. He wrote me a wonderful handwritten letter. In it he thanked me for the card that he could sign for his children to witness, as when he found out that he had a card back in 1992 it was one of the happiest days of his professional football life. – Such a great heartwarming memory to share. Another great response from a player who had a fun career. A monster defensive lineman, Craig Schlichting played for the Wyoming Cowboys in college. As Team Captain, there he’d amass 135 tackles, 19 sacks, and 5 fumble recoveries over 4 years. He also won Weight Lifter of the Year honors from the college in 1989. The Minnesota Vikings scouts liked the 6-5, 270 pounder, and drafted Craig in the 8th round of the 1990 draft. Although he didn’t make the team, he eventually spent 5 games on the practice squad of the Pittsburgh Steelers that season. The WLAF’s New York- New Jersey Knights drafted Schlichting in the 2nd round of the league’s 1991 positional draft.  Craig ended up starting all 10 games for the Knights that season at defensive end, raking in 28 tackles, 6.5 sacks,  and a recovered fumble. His 52 yards for losses, led the team. Perhaps his best day came against the Montreal Machine, where he manhandled their line for 4 tackles, 3.5 sacks, and 33 yards in losses. Craig returned for the 1992 season, and put up another 3 sacks. After the WLAF reorganized following the 1992 season, Craig headed over to the Arena leagues, playing for the Cincinnati Rockers for one season recording 6 tackles, 3 sacks, and a forced fumble.

Oddly along with Paul Berardelli (who I received back on the same day), Craig entered into the educational system and has been with the Triton Public School System since 1993. He’s earned his Master’s in Educational Leadership and is currently a Principal at a Dodge Center Middle School in Minnesota. He wrote me perhaps the longest and kindest letter I’ve received to date from a player talking to me about his experience in the WLAF. In his letter he discusses the ‘quality of experience’ (ie. allowing fans onto the field and the affordability) that the league brought to the table. Craig went on to tell me about a fan who said he couldn’t get a Giants ticket for even $100.00, but for the Knights, he could get tickets, parking, and a hot dog for less than that. Craig also agreed that the WLAF could have been successful if the NFL had just committed to the WLAF’s success instead of just letting it die on the vine in North America. Such a shame really, because based on the fan’s reaction to Craig, it sounds like there were a few crazed fans out there just like myself that appreciated what WLAFers were doing. I gave Craig an extra card, that I hope that he takes the time to frame somewhere for the great memories.