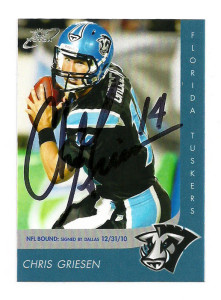 In the short lived history of the UFL, no quarterback was more prolific than the Florida Tusker and Virginia Destroyers quarterback Chris Greisen.

Long before the signal caller played in the UFL, Chris was a 7th round pick out of Northwestern Missouri, of the Arizona Cardinals in 1999. A two time All-American after leading the Bearcats to their first ever National Championship, Greisen held numerous records upon leaving the school.  He played sparingly for the Cards over the first 3 seasons, and was released in 2002, only to latch on to the Redskins roster by the end of the year. Eyeing more experience, Chris joined the Rhein Fire of NFL Europe. He had a pretty solid season playing in Germany, throwing for 10 TDs, and 843 yards in only 131 attempts.

Following his time in the NFLE, Greisen entered the Arena Football League 2 and played for the Green Bay Blizzard. After a successful debut for the team in 2004, Chris was quickly signed by the Dallas Desperados and became the primary backup.  Signing with the Georgia Force in 2007, Chris was finally able to take over the reigns as the starting quarterback.  The Force posted a 14-2 record as Greisen threw a league record 117 TD passes. He’d continue to enjoy success with the AFL until it suspended operations in 2009.

Wanting to continue his career, Chris pursued a shot with the UFL Florida Tuskers in 2009, backing up former NFL pro Brooks Bollinger. With the return of the AFL in early 2010, Chris decided to split his time in both leagues. He signed with the Milwaukee Iron and then went on to throw an AFL record 5,139 yards.  Back to the Tuskers after the season, Chris ended up starting for the team after Bollinger went down due to injuries.  He’d lead the team to the Championship game and throw for 346 yards while rushing for 2 scores in a loss to the Las Vegas Locos.  He signed with the Dallas Cowboys after the UFL season.

With the UFL still clinging to life in 2011 and the Tuskers moving to Virginia, Chris returned to play for the Destroyers under Marty Schottenheimer. He’d complete 21 passes for 174 yards as the Destroyers vanquished their arch rival Las Vegas Locos 17-3 in the Championship Game. Greisen played in the final season of the UFL’s existence in 2012.

Since then he’s opened up a passing academy in Wisconsin, where he trains and counsels future professional quarterback prospects. I had made this great card of him and decided to see if he’d sign it for me and enclosed extras for him to keep. A month or two later I got a response from him thanking me for the cards, and asking for a few more of ‘these awesome cards’.

My cousin got me a game program full of autographs back in 2004, that I found recently when digging through some boxes. While the AFL was quirky and entertaining playing in “The Drum” (Frank Erwin Center), their legacy did not last, as the franchise packed its bags after 4 seasons.

Jeremy Beutler was originally claimed by the Carolina Cobras in 2000, but opted to play for the Frankfurt Galaxy in the NFLE for 2001 recording 2 sacks. In 2003 Jeremy would sign with the Dallas Desperados playing there for one season before joining the Wranglers for the next two. In 2006 Beutler played for the Kansas City Brigade recording 14.5 tackles and a sack before retiring after the season.  Beutler’s best season probably came in 2004 when he recorded 47 carries for 133 yards and 6 touchdowns. He quickly entered coaching and became the offensive line coach of the Wranglers, but the team wrapped up operations after 2007.