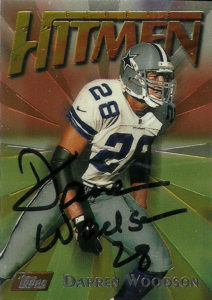 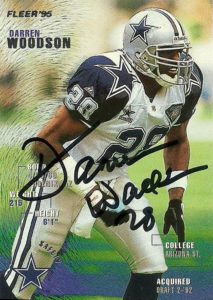 I had gotten Darren Woodson just once at training camp way back at St Edwards in 1992. It was the last year I’d enjoy going to training camps full time during the summer as school, girls, and work took more of priority after High School. Looking back, it was just perfect timing for me to go to camp during those years in the early 90s, as not only was I in that transitional point moving into being a young adult, but also the Cowboys were building their dynasty, multiple great cards were appearing on the market, and players were still relatively eager to sign for free. 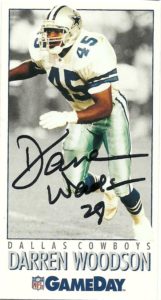 I always wanted to get Darren’s GameDay 1992 entry signed. The one I had made it back to camp the following years, but it never made it into his hands. It’s a great rookie card technically- one of the first to picture him in his Cowboys uniform.  The other two here, are really just filler from sets that I liked after the fact. Although I liked the gaudyness of the Topps Hitmen cards, I think the luster of Darren’s uniform is lost in all the gloss and metal sheen.  The Fleer 1995 was audacious as ProSet 1992 in its design, and as such it was just as disastrous in my mind. The chaotic design which varies per team, really can be a negative on the presentation on the card itself. This one for example breaks multiple design rules. The most annoying among them being Darren’s position listed quarter circling the star. I don’t know what is up with the fingerprint effect either. (It also didn’t help that the Cowboys joined in the ugly trend during the mid-90s of plastering the team logo on the shoulder of the uniform.) Still for many of the rest of the teams in this set outside of the Cowboys and a few outliers, the design is clever and daring with the player information displayed on the front.

I had failed previously to get Darren’s autograph back in 2015. I fired out another attempt in 2016 when he started popping up on the scene around Dallas events. I was really surprised to see this back in 11 days flat. As you see on the 1992 StarPics card, Darren Woodson was originally an outside linebacker, but his skill set determined that he was a better fit at the safety position. With the emergence of Darren Woodson at safety, James Washington became expendable. That’s a tall thing to say considering James Washington’s performance for the Cowboys over the past few seasons had been exceptional- but Woodson was up to the tall order, both being a great hitter and well rounded in coverage. In 1993 he’d set a team record for defensive backs with 155 tackles from his strong safety position. Frequently he’d line up in a linebacker position (sometimes called ‘elephant’ at the college level) and unfairly cover the slot receiver. He’d be named AP in 1994, 1995 and 1996, the ProBowl from 1994 to 1998, was a SuperBowl Champion 3 times and over 12 seasons he’d become Dallas’ all-time combined leading tackler with 1350 tackles.  With the retirement of Darren Woodson in 2004 (due to injury) Dallas’ secondary collapsed.  In 2006 a rumored comeback was in the works, but with the Cowboys unable to make the playoffs he remained in retirement. Since football Darren has been involved with ESPN and provides honest commentary about the Dallas Cowboys. Listed below is also a nice highlight reel of Darren’s hits and picks.