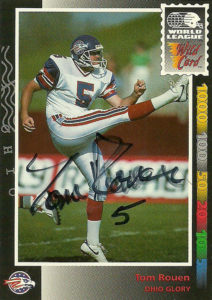 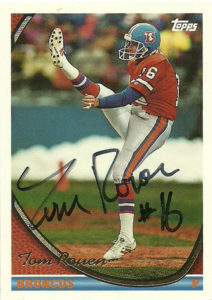 Underutilized by the Giants in their ground and pound based offense, nobody really paid much attention when he signed with the San Fransisco 49ers as a free agent in 1994. Why, Ed McCaffrey only had totaled 92 receptions for 1091 yards and 7 touchdowns in 3 seasons after being a 3rd round pick of NY. It’d be in those early years with the Giants, who were struggling with the departure of their coach Bill Parcells, and a Super Bowl hangover, that I’d see McCaffrey go out one Thanksgiving contest and give his all in a game, while his team lost 30-3 to the Cowboys.  Ed didn’t really impress with the 49ers that next season either, however he won his first Super Bowl title. After that one unimpressive season, the jig was up in San Fransisco-land and Ed was back on the street by 1995.

With the Three Amigos at the end of their career, new offensive coordinator Gary Kubiak was looking to stir things up. The Broncos were transitioning at the time and McCaffrey (and fellow receiver Rod Smith,) seemed to fit the bill. McCaffrey proved to be a nice find for the Broncos as every season through 2000, he increased his receiving production with his sure hands and deceptive speed.  This culminated in career highs that year (2000) with 101 receptions for 1317 yards and 9 touchdowns. While injuries finished his NFL career prematurely in 2003, Ed won 2 Super Bowl rings with the Broncos and was named to the Pro Bowl for his 1998 performance. As one of John Elway‘s favorite targets, McCaffrey finished his career in Denver with 462 receptions for 6200 yards and 46 touchdowns.

In 2009, Ed was named to the Denver Broncos 50th Anniversary Team and in 2012, became a color analyst for the Broncos Radio Network.