Shifty and speedy, Noel Devine posted solid numbers while he played college ball at West Virginia. He finished his college career with 4317 yards on 729 carries, scoring 29 TDs. Noel also had 98 receptions for 710 yards for 2 TDs. His personal best was in 2009 when he posted 241 carries for 1465 yards and 13 TDs on the ground. Due to his size (5’7, 160), an ankle injury, and a poor combine showing- Noel was not drafted during the 2011 draft.

He was signed by the Philadelphia Eagles, but after 4 days he left the team for undisclosed reasons. Unable to find an NFL squad, Noel joined the UFL Omaha Nighthawks (2011) for a season rushing 5 times for 14 yards and a TD, while catching 2 passes for 20 yards. The following year he’d join the Montreal Alouettes of the CFL playing there for two seasons (2012-2013). After a short off-season with the Edmonton Eskimos, he returned to WVU to finish his law degree in 2015.

During 2017 he resurrected his football career joining The Spring League, and in early 2019 signed with the Wheeling Roughriders of the American Arena League. He was among the players available for the XFL 2020 pool, but was not selected.

I pulled this autograph from a box of Upper Deck College Legends I bought in 2019. It’s rarer and rarer to see on card autographs, but overall I was pretty impressed with the look of this shot. 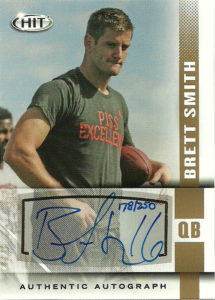