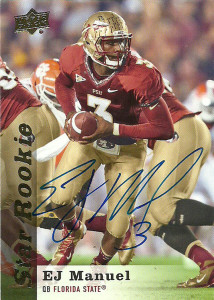 I had seen a lot of responses from EJ Manuel during his rookie season so I decided to take a stab at him. I was really disappointed when I didn’t get a response.  I like EJ and I still think he has the tools to succeed at the pro level. There are a lot of haters out there who want to see players do nothing less than fail, whether because it is a draft grade they gave them, they hated the guy at the college level,  or just an impatient member of the pro fan base, people sometimes just have it out for professional players.  Anyway I wrote a very encouraging letter -and never heard back. With the sting of that failure still fresh in my mind, well over a year later, I was talking to Spoodog and he offered me this EJ Manuel and a Marquise Goodwin autograph in exchange for one that I had given him earlier in the day.

It wasn’t until 2011 that EJ Manuel finally took over as the starter for the Florida State Seminoles. He had been battling future pro Christian Ponder at quarterback since he arrived on campus his Freshman year. His senior year was his signature season at FSU, leading the school to a 12-2 record. He threw for 3,392 yards and 23 TDs while rushing for 310 yards and 4 TDs on the ground.

Manuel was taken by the Buffalo Bills in the 2013 NFL Draft with the 15th overall pick. He’d start 10 games over his rookie season for new head coach Doug Marrone, finishing with 1,982 yards passing, 11 TDs, and 186 yards rushing.  In 2014, EJ started 4 games, but during the 4th game against the Houston Texans, Manuel threw an errant pass that was intercepted at the line by defensive lineman JJ Watt and returned 77 yards for a TD. This would be the turning point of the game and the season for Manuel. He’d be benched in favor of Kyle Orton, who as Marrone put it, “Gave the Bills a chance to win now.” With the departure of Marrone after the season, the re-retirement of Kyle Orton, and the hiring of Rex Ryan, it appears that EJ has been given a defacto second chance to lead the Bills.