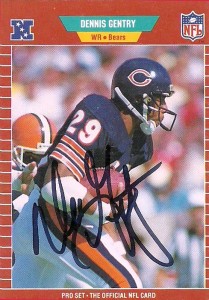 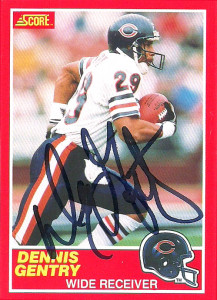 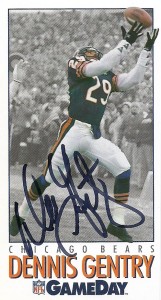 A versatile player who started his career at runningback, Dennis Gentry with his 5-8, 180 frame is perhaps more well known as being a dependable receiver and explosive return man for the Chicago Bears. Gentry played with the Bears from 1982-1992, where he initially served as Walter Peyton’s understudy. Gentry in the meantime spent his time contributing on special teams as a return man and also moonlighting as a receiver. With the arrival of Neal Anderson, Gentry became a scat back for the Bears, coming in on 3rd down, and providing an additional option out of the backfield.

Between 1986 and 1989, Gentry ranked among the top 5 in kick returns in the NFC. In 1986 Gentry led the NFL with a 28.8 kick off return average, and was named AP in 1987. When Dennis retired in 1992, he was the franchise’s all-time leading return man, breaking the yardage and return mark previously held by Bears great Gale Sayers.

Gentry played his college years at Baylor and was distinguished as a return man, blocker, and runner. He rushed for 883 yards and caught eight passes for another 77 en route to all-Southwest Conference honors. Gentry amassed 2,213 yards- good enough to be Baylor’s  second-leading rusher in history. 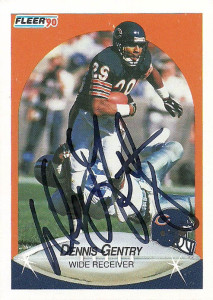 A Tecmo Bowl legend, Gentry appeared in both Tecmo Bowl and Tecmo Super Bowl. In both he is featured as a dominant return man and adept receiver.  In media, he is also remembered for being a part of the Bears Super Bowl Shuffle video.

Gentry over the years had some really good classic cards. The Fleer 1990 was among his best in action featuring a full body shot and him breaking a tackle. Not to be outdone, the Score, ProSet, and GameDay entries all were very solid. In fact, I had to drop a ProSet 1990 from the group to send because there were so many quality shots of Gentry. A reliable TTM signer, Gentry has a nice, loopy signature.  Since retirement, he’s spent time in coaching and lives in Texas.