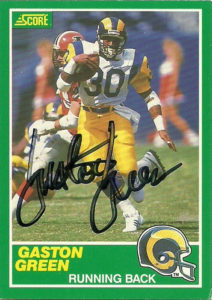 At the time of his graduation from UCLA, Gaston Green stood atop the Bruins’ career rushing charts with 3,731 yards. After trading Eric Dickerson, John Robinson was looking to reload the Rams offense. The Rams had other needs as well, but when the #1 back in the draft plops in your lap at #14, you take him. There were quite a few recognizable names in the 1988 NFL Draft. The most notable name was Thurman Thomas, selected near the top of Round 2. John Stephens, taken a few picks after Gaston, won the 1988 Rookie of the Year Honors. Other names that rounded out this group were: Lorenzo White, Ickey Woods, Brad Muster, Craig Heyward, and Lars Tate. With the surprise emergence of afterthought Greg Bell in LA, Gaston played sparingly for the Rams, biding his time primarily on special teams. After 3 seasons behind Bell, Cleveland Gary, Robert Delpino, and Marcus Dupree– Gaston was traded by the Rams to Denver in 1991. 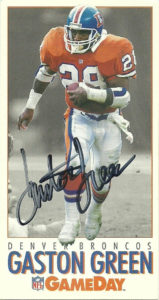 The Broncos were a run first squad as well. It was good timing as starter Bobby Humphrey was holding out. Gaston took over as starter and didn’t look back. He had his best season as a pro posting 1,037 yards on 261 carries, and 4 touchdowns, earning Green his only Pro Bowl appearance. In 1992, he had 648 yards on 161 carries. After the season he signed with the Los Angeles Raiders, but opted to retire instead. It really worked out best this way for Gaston, as he retired before he was 30 with his health still intact.

Great cards of Gaston. In fact, nearly all the card images of Green from his playing days are amazing. It was really tough to choose between his GameDay, Action Packed, Score, and ProSet entries, but these two were among my favorites. I have a box that I keep of players that I really want and when Gaston popped up, I dashed a letter out the door to him the next day.