Matt is a very well-traveled quarterback. He’s seen action on 4 different continents, including stops with the Seinajoki Crocodiles, Fluminense Imperadores, Gold Coast Stingrays, Upsalla 86ers. A mobile and savvy veteran of gridiron and the Arena leagues, Matt was back on his second stint with the Talons in 2014.  During his tours in the Arena leagues, Bassuener (pronounced: Baw-zing-r) had also played for the Louisville Fire, Amarillo Dusters, and Fairbanks Grizzlies. He got his first crack at the AF1 league in 2011 with the Tulsa Talons throwing for 1,803 yards and 27 touchdowns. A dangerous and crafty scrambler, Matt had 12 TDs rushing that year as well. He’d earn a tryout with the Barnstormers in 2011 before landing with the Gladiators in 2012.

Arriving roughly halfway through the 2014 season, Matt spent most of the time fighting Shane Boyd for the starting job. Allowed to finally lead the team during the final few contests, Bassuener, led the Talons to wins over the LA Kiss and New Orleans Voodoo in the consecutive final two contests. Matt also helped power San Antonio’s highly ranked rushing attack, finishing 4th in the league in rushing with 228 yards on 48 attempts and a TD.  After settling in Matt ended up with 23 TDs to 8 INT while throwing for 1,207 yards on 107 completions. 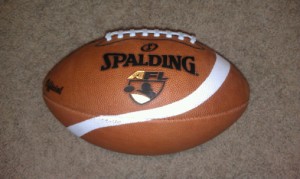 Coming to games every week and giving cards to the team’s COO paid off, as he upgraded myself and my wife up to field seats before the game. With a few minutes to decide, I chose to sit at the 30, then moved down just a bit to the 25. A few minutes later a young woman came and sat beside us. After striking up a conversation, we found out the young woman turned out to be Matt’s girlfriend. Occasionally she’d lean over the front and scream at him in Portuguese, cheering him on or yelling at the Sharks’ players. A few minutes later I caught an errant pass from Matt in the stands. It’d be a nice memento to keep of our adventures with the Talons and the Arena league.  After the game I gave Matt his card. He was almost as excited as his girlfriend to get his own football card, and put it up on his Twitter account. He lives in Austin, and continues to train and play as an ambassador to the sport of football.

Of note, Matt was a stunt double for J.D. McCoy from the TV show Friday Night Lights. Over his college time at Georgetown, Bassuener threw for 3,233 yards and 23 touchdowns, while also gaining over 400 yards rushing on a healthy 5 YPC average.