Ah Jeff George- One of the most reliable TTM respondents in the business. I had originally gotten him way back in 2011 on 3 cards- but over the years had stocked up on some absolutely beautifully designed canvases I wanted to see his autograph grace. Usually a very quick signer, I was surprised to wait some 220+ days for his autographs on these cards, however true to his ways, I just had to be patient and they showed up.

Probably my favorite among them is this Skybox 1993-94 card. I only discovered these cards right at the intersection of my dead cat bounce in collecting- and right as the industry really started going off the rails. At the time, something as over produced as this with the duotone background was still novel. Photoshop and current design standards we take for granted today were barely getting off the ground. I only got a few of these from packs at a Hollywood Video, but I’ve kicked the tires a few times about buying a box wholesale now.

Jeff’s 1992 Gameday card is solid. It’s obvious that I was at the bottom of his mailbag- as he dispensed with the formality of personalizing the cards, and his signature looks a bit rushed on these cards. The framing itself is a great example of when Gameday’s design decisions really paid off as this canvas is exciting and it looks as though he is launching off of it.

I did feel guilty asking for 5 but, I reasoned that I had held off sending back to him for 8 years or so- so that made me feel a bit better about breaking my own rule.

Of these three other college uniform cards, I didn’t have the Fleer one, and it was considered rare back in the day. I got a box of Fleer 90 a few months ago, and I had forgotten how simple and elegant these cards were- despite the floating helmet. I remember Josh laughing at the Score 90 card because George wasn’t even throwing in the shot. He was even less generous about the Topps 90 one, but myself I do appreciate it as you rarely see a well composed shot of a QB under center next to his hogs.

In 2019 Jeff was spotted taking his son Jayden- an accomplished pro-style quarterback on recruiting visits around the country. Although his response took a while, Jeff did take the time to read my letter and in response to my suggestion that he consider coaching in the XFL- he wrote on the letter, “Perhaps in the future.” 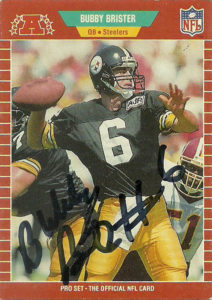 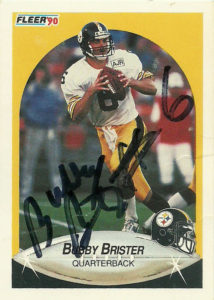 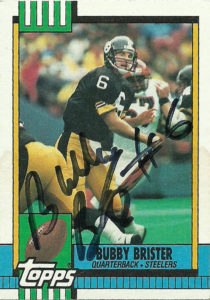