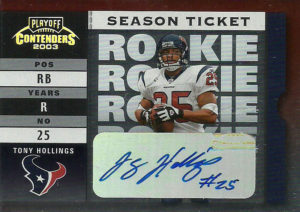 Tony Hollings’ career has experienced some peaks and valleys.  He arrived at Georgia Tech as a defensive back in 2000.  Needing a runningback, the Yellowjackets converted Hollings over to the offense.  In only 4 games he displayed electrifying Heisman potential, running 92 times for 633 yards and 11 touchdowns. He’d suffer a season ending ACL injury against BYU. Hollings declared for the Supplemental NFL draft in 2003. The Texans fell in love with him and coughed up a 2004 2nd round pick.

The Texans were looking to improve their offensive skillset. With James Allen and Jonathan Wells in the backfield, the braintrust that was in Houston expected Hollings to be the home run hitter that they desperately needed.

This has been a hallmark of the franchise, and over time has cropped up time and time again. The Texans have always felt they have been a player away, and they reach for talent whether through the draft (Hollings) or through Free Agency (Ex. Ed Reed, Ahman Green, Eric Moulds, and Brock Osweiler).

What the Texans really didn’t see was that Tony had lost the burst to the ACL injury that just made him so electrifying. Snakebitten, Hollings also experienced knee and toe injuries that limited his production. The first game he played in was the first game I went to- the Texans home opener against the Chiefs. He finished
2003 with a woeful 102 yards on 38 carries. He’d follow that up with an equally disappointing 2004 with a stat line of 47 yards on 11 carries.  A change of management in 2005 signaled the end for Hollings. He’d dress for 2 games before being shelved indefinitely and never see the field again for the Texans.

After getting nibbles from both the Bears and Colts respectively, Tony reappeared on the football radar in 2007, running hard for the Hamburg Sea Devils of the NFLE.  There he experienced a renaissance of a sense, collecting 100 carries for 389 yards and 5 touchdowns.  After the NFLE was folded, Tony’s effort earned him some NFL time briefly on the roster of the New York Jets in 2008.  Tony closed out his career in the German Football League playing for the Berlin Adler in 2009.

A frequent tailgater at Georgia Tech events, at last glance Tony lives in Georgia and works for a distribution company.  I liked Hollings and hoped that his career might work out in some way. I might try to get him on a WLAF custom at a later date.

Playoff made some nice cards, and this 2003 entry was endemic of design during the time. Everything was really bold going into the 2000s. With that giant ROOKIE pasted 3 times in the background, it sure does grab my attention, but this to me is a card that sells itself well but does not finish. I really wish that they had used the rest of the right side of the card. It feels so blank out there, and the ticket just blends in black with the steel blue which doesn’t help. The artifact from the certification stamp makes the card look like it is damaged, but among the plethora of ugly cards that were still being pumped out at that particular time, there were much worse designed cards to choose from. Jack Bicknell was quarterback for the Montclair St. Redhawks back in 1959.  After establishing himself as a successful high school coach, he found himself at Boston College coaching runningbacks in 1968, – a position he’d hold through 1975.  He’d take his first head coaching gig at Maine for the Black Bears, that next year, but return to be named head coach of Boston College in 1981.  He’d really put BC on the map, and put his faith in a young quarterback by the name of Doug Flutie, who led them to a victory against the Miami Hurricanes with a last second hail mary, and won the Heisman in 1984.  Before his arrival at BC, the school hadn’t appeared in a bowl game in some 40 years. Bicknell not only got them there, he got them to four over his tenure including the Tangerine Bowl, Cotton Bowl, Liberty Bowl, and the Hall of Fame Bowl.  Over his coaching career at BC through 1990, A new football world beckoned in 1991 to Jack, and the WLAF came calling. He’d be named head coach of the Barcelona Dragons franchise and was the face of the franchise for the next 11 seasons.  In the team’s inaugural season the Dragons finished an impressive 8-2, but eventually lost in the World Bowl to the Monarchs. 1992, the team won an overall weaker division, and was bounced from the playoffs.  It wouldn’t be until 1997 that Cowboy Jack won his only World Bowl, 38-24 over the Rhein Fire.  The team also returned to the big game in 1999, and 2001, but lost on both occasions. Bicknell coached the Dragons through 2003, when the franchise was shuttered, finishing with a 61-55 record.

Jack also coached with the Scottish Claymores in 2004 to a 2-8 record, and then the Hamburg Sea Devils in both 2005 (5-5) and 2006 (3-6-1), before citing health reasons for retirement. Boston College in 2007 also named a Scholarship in his honor. He currently has a home in New Hampshire and Florida, and enjoys watching both of his sons coach at the NFL level.

Jack was kind enough to sign 3 cards for me through the mail. I had checked sportscollectors.net and it appeared as though there was no success from him since 2007 so I went ahead and took a stab in the dark on this one that it might just still work.