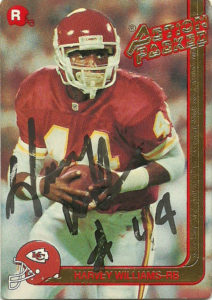 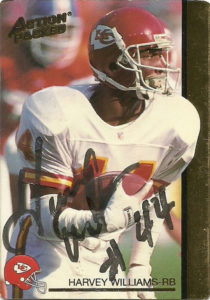 Harvey Williams is an intriguing story in football history.  A tricky inside runner with really nice hands, Harvey played for the LSU Tigers from 1986 to 1990. His best season came in 1987 when he had 1001 yards on 154 carries and 11 TDs, along with 20 receptions. He finished 3rd in school history with 2,660 yards rushing, and set a few records along the way. He rushed for a single game high 213 yards against Kentucky, and tied a school record with 4 TDs rushing against Miami, OH.  With intriguing size and speed, scouts were concerned about lingering knee injuries and his consistency entering the pro level. 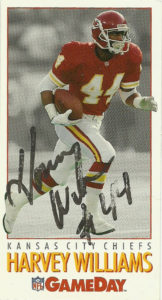 Harvey was the second runningback taken during the 1991 Draft. He’d go at #21 overall to the Chiefs surprisingly- a team that was deep with Christian Okoye, Barry Word, and Todd McNair at runningback. Still Harvey was pictured as the game breaker that the Chiefs needed for their Martyball offense. (Notably the 1991 draft is a graveyard of runningbacks. Among them, the most successful is probably Gary Brown– and he was converted from Safety.)  Harvey had a pretty decent run his rookie campaign.  He led the team in yards from scrimmage with 1,118 yards putting in time as a kick returner (524 yards), and change of pace back (97 carries, 447 yards, 16 receptions 147 yards). He also scored 2 TDs receiving and 1 rushing.   He continued to bide his time in 1992 as a kick returner and 3rd down back.  After the backfield moved on from KC, Harvey got beat out by future HoFer Marcus Allen for the starting gig in 1993.  Things got worse when Harvey suffered a frightening hit that left him motionless on the turf.  While he recovered, it pretty much ended his season and his time in KC.

He finally reached his potential when he signed with the Raiders the following year in 1994. Harvey was a true Raider through and through. He walked the walk and talked the talk.  During his first season with the Raiders he ran 282 times for 983 yards and 4 TDs. He also got to display those impressive hands, snatching 47 receptions for 391 yards and 3 TDs. In 1995 he had his best season as a pro registering 1114 yards on the ground and 9 TDs, along with 54 receptions for 375 yards. While he lost the starting job to Napoleon Kaufman in 1996, Williams continued to play for the Raiders and even made a memorable transition to TE/ H-Back, retiring after the 1998 season.

Great cards here of Harvey. It was impossible to choose even my top 5, as all the vendors at the time had great photos of him in action. These 3 cards were among my favorite. Both of his Action Packed entries really stand out with their vibrant color and just bursting with action. Even though I am very disappointed in the dying marker he used to sign my cards, I was happy to finally get Harvey’s autograph.